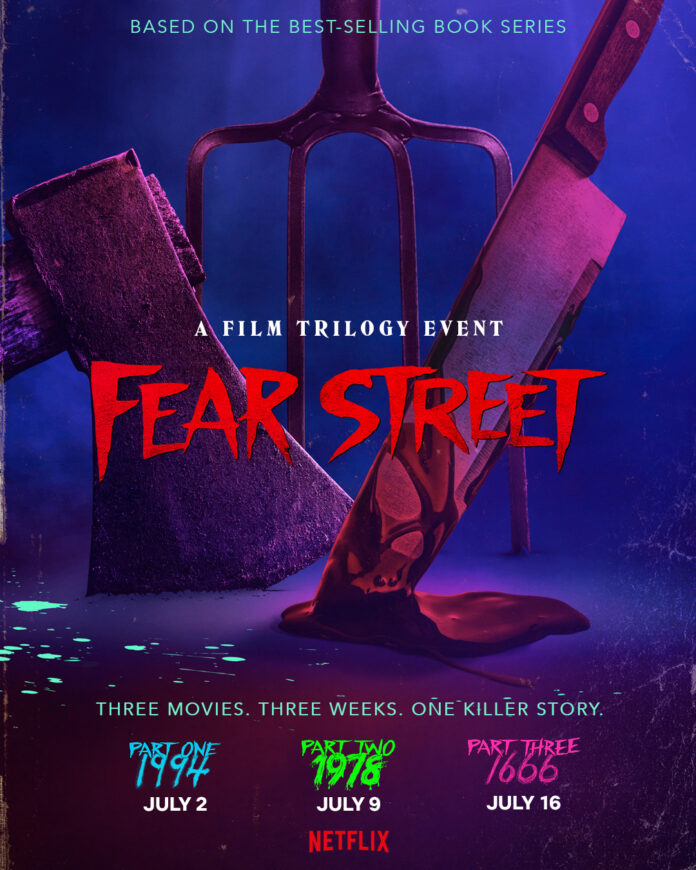 Netflix is offering horror fans a summer of fear this July, as they release their Fear Street trilogy, based on the novels by R.L. Stine, as a major weekly event. Three movies, three weeks, one director in Leigh Janiak, best known for the 2014 horror Honeymoon.

“We filmed all three Fear Street movies over one crazy, bloody summer,” Janiak said.“It’s a dream that audiences now get to experience the story in the same way – back to back to back, with only a week of waiting in between. I can’t wait to welcome everyone into the world of Fear Street in 1994, 1978, and 1666!”

Stine added, “Fear Street fans are in for a treat – and some major surprises. Readers know that the book series is rated PG. But the movies are rated R. That means a lot more thrills – and a lot more terror! I have seen Leigh Janiak’s epic trilogy releasing on Netflix in July and I can tell you the scares and the SCREAMS are more than I ever expected. What fun to see the horrors of Shadyside come to life!”

Here’s the synopsis: In 1994, a group of teenagers discovers that the terrifying events that have haunted their town for generations may all be connected — and that they may be the next targets. Based on R.L. Stine’s best-selling horror series, the trilogy follows the nightmare through Shadyside’s sinister history.

Check out the teaser below!