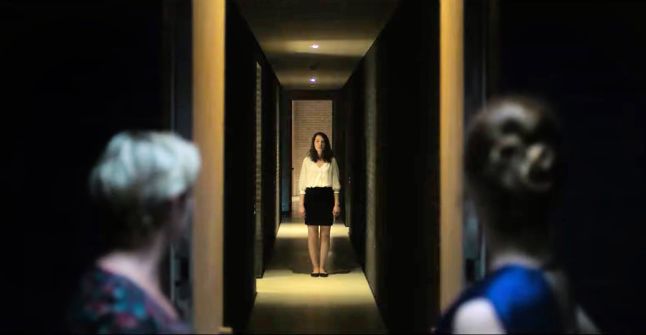 Who doesn’t love a good dinner party? Well… for starters, most of the players in the new Welsh horror film The Feast. And those that start out as fans of them, surely wont end up with the same sentiment. Glenda (Nia Roberts) is racing around trying to prepare for a dinner party that her husband, Gwyn (Julian Lewis Jones), has set up. Glenda’s family lives on a large plot of land near the mountains in the countryside. There may be minerals in the land that Gwyn’s business partner Euros (Rhodri Meilir) will pay top dollar for. Gwyn arranged the dinner to get their neighbor Mair (Lisa Palfrey) and Euros in the same room to procure a deal. 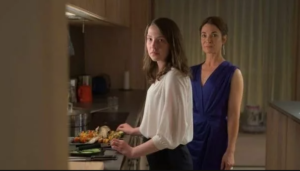 To add to Glenda’s anxiety, her usual help is unavailable, so she sends Cadi (Annes Elwy) in her place. Cadi is quite unusual and clashes almost immediately with Glenda’s style and expectations. Glenda’s kids Guto (Steffan Cennydd) and Gweirydd (Sion Alun Davies) only make matters worse and are a pain in the ass. Gweirydd is obsessed with his triathlon training and eating a very specific diet. Guto is just a mess. The fact that the two don’t really get along only makes for a more comfortable dining atmosphere. As the evening progresses, the horrors begin to set in. 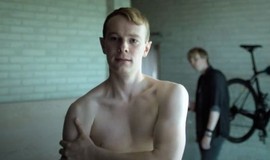 The Feast is the feature length debut for director Lee Haven Jones and writer Roger Williams. The two collaborated on Tir – a TV series – in the past. Jones and Williams break the film into chapters to help the narrative flow. Horror movies are typically not known for their scripts and The Feast is no different. Cadi is a woman of few words, although Glenda more than makes up for her. Many of the characters are difficult to relate to and their behaviors don’t seem natural. The Feast is full of juxtapositions. From total silence immediately going to loud noises to the completely dark corridors in the house framed by light. The cinematography throughout is a saving grace although it doesn’t reinvent the wheel.  The Feast is not for the squeamish. As the evening devolves into a nightmare, the imagery becomes more and more graphic.

If there is anything The Feast has taught me, it is to not let strangers in my home. From the jump Cadi clearly has a screw loose. Her antics being accepted by those around her is incredibly distracting and unbelievable. This lack of realism takes away from The Feast. Jones works at creating a level of uneasiness throughout the film. Elwy handles this perfectly and her vacant stares and slight head tilts begin to make your skin crawl. The uneasiness turns to dread as the night progresses. The ominous music becomes a staple in the background as horror lies every which way. The Feast may be polarizing with some enjoying how uncomfortable the film makes you feel, while others despising that feeling. While the film has some interesting moments, it’s lack of true scares and excess of uncomfortable imagery make it a film to avoid.