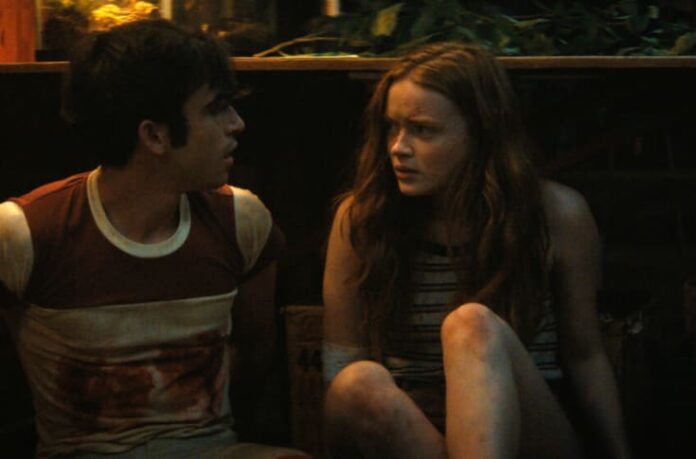 It’s already been a week since the first Fear Street film was released and it was fantastic! Part 2: 1978 will be available this Friday on Netflix. The second installment ups the thrills and kills factor and has successfully added another rung to the ole’ teen slasher ladder. Last week, viewers were taken to 1994 where a group of teens are looking to finally end the curse that has haunted their town for decades. Deena (Kiana Maderia), Sam (Olivia Welch), and Josh (Benjamin Flores Jr.) must find the missing pieces by talking to someone who survived the last brutal slaying that happened in Shadyside, C. Berman (Gillian Jacobs). In order to end the witches curse, they must dive back into the memories of the Camp Nightwing slaughter, summer of 1978.

Cue another kick ass soundtrack to fit the period! In the first movie, we heard songs that rocked the 90’s grunge era. Fear Street Part 2:1978 continues the musical nostalgia and features a classic playlist of songs including Cherry Bomb (The Runaways), Slow Ride (Foghat), The Reaper (Blue Oyster Cult), Carry On My Wayward Son (Kansas), I Will Survive (Gloria Gaynor), and The First Cut Is The Deepest (Rod Stewart) with so much more. Totally setting the mood for the lake and woodsy camp style thrasher film reminiscent of the infamous, Friday the 13th (1980) and the more recent rendition (and personal favorite of all the seasons, so far), American Horror Story, 1984 (2019).

Ziggy Berman (Sadie Sink, Stranger Things) is a fiery redhead who is not afraid of doing her own thing (Girl after my own ginger heart!) and is a last year camper at Camp Nightwing. Her sister, Cindy Berman (Emily Rudd) is a preppy posing “do-gooder” counselor and stickler for rules. After having to step into more of the parental figure role due to some family issues, Cindy is doing whatever it takes to look after Ziggy while looking for a way out of Shadyside to accomplish bigger things. Her sweet, virgin, and fellow counselor is boyfriend, Tommy (McCabe Slye). Tommy keeps Cindy calm and supports her when the stresses of life, like Ziggy, become overwhelming.

Gore and sex/intimacy go hand in hand in thrasher films. Councelors are seen smoking weed and yes, sex is inevitably apparent. Still very much an R rating and to side note: I love every bit of it!

Ziggy (Sink) has her own battles to contend with at Camp Nightwing. There’s the social divide between the Sunnyvalers and Shadysiders but Ziggy is targeted and bullied by the other campers. Ziggy is outspoken and doesn’t take any shit from anyone which draws attention to everyone else. She is often referred to as the witch of Sarah Fear. First year counselor Nick Goode (Ted Sutherland) comes to her aid during one of her bully encounters and it’s quite apparent of the feelings he has for her. Fear Street Part 2: 1978 reveals the backstory of Sheriff Goode (Ashley Zuckerman).

A crazy man with an ax is now on a murderous rampage throughout Camp Nightwing. The body count quickly goes on the rise as he is influenced by the witch of Shadyside, Sarah Fear. The blood and gore intensifies in this second installment and it’s grotesquely glorious! Fear Street Part 2: 1978 is linking the ties of the serial killers to the possession and curse spanning from 1666 to the current of the three films, 1994.  The ghostly killers caught in the witchy web have a 13 Ghosts (2001) vibe and I dig it.

A few of only Shadyside campers are killed off screen. We are left to see the goopy chunks of human mushiness and littered body parts. Other scenes go the full extreme of the axe chopping hot mess on the counselors and it’s amazing. I am genuinely pleased with the brilliant combination of retro and new age slasher films for this generation. There’s a wonderful display of each sister’s side that explores their horrific journey while trying to survive the Shadyside curse. For the second Fear Street film, director Leigh Janaik is killing it!

C. Berman (Jacobs) has survived the horror that occurred at Camp Nightwing. She couldn’t save those who died there by ending the curse but she can for the teens of 1994. There are two more ghostly killers, The Milkman and The Boy with the Bat, and of course the witch herself, Sarah Fear, to learn about. The third and final film hopefully acknowledges those two murderous backstories and will take us back to where the horror originally began. Fear Street Part 3: 1666 will be released next Friday, July 16th on Netflix. The last movie will also bring back cast members that are featured throughout the first two films. I certainly hope to see more of R.L. Stine’s Fear Street edition book series comes to film life. Each one keeps getting better! So good and worth a watch.

‘Moonshot’ Trailer: Lana Condor And Cole Sprouse Fall In Love On A Rocket To Mars