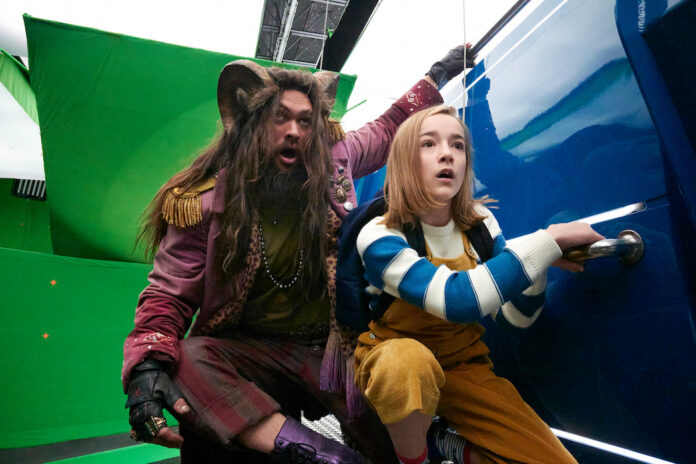 I’m old, so when you tell me Jason Momoa is starring in a Netflix adaptation of Little Nemo in Slumberland, I immediately think of the NES video game (that’s super hard to find!!) from 1990. That film, Slumberland, is based on the popular comic strip by Winsor McCay, and is set in the world of dreams, similar to Netflix’s hit Sandman series but with a more adventurous, all-ages spirit.

In this version of the story, the lead character is actually a girl, Nema, played by Marlow Barkley. Momoa is her beast-like outlaw companion Flip, and together they traverse dreamland in search of her missing father.

Slumberland is directed by Francis Lawrence, director of multiple ‘Hunger Games‘ movies and the upcoming prequel, The Ballad of Songbirds and Snakes.

That Momoa continues to show up in movies like this are why he has so many adoring fans. He doesn’t just move from one studio blockbuster to the next, even though he could. When there’s fun to be had in a role, as there clearly is in this one, Momoa makes room for it.

Slumberland takes audiences to a magical new place, a dreamworld where precocious Nemo (Marlow Barkley) and her eccentric companion Flip (Jason Momoa) embark on the adventure of a lifetime. After her father Peter (Kyle Chandler) is unexpectedly lost at sea, young Nemo’s idyllic Pacific Northwest existence is completely upended when she is sent to live in the city with her well-meaning but deeply awkward uncle Phillip (Chris O’Dowd). Her new school and new routine are challenging by day but at night, a secret map to the fantastical world of Slumberland connects Nemo to Flip, a rough-around-the-edges but lovable outlaw who quickly becomes her partner and guide. She and Flip soon find themselves on an incredible journey traversing dreams and fleeing nightmares, where Nemo begins to hope that she will be reunited with her father once again.