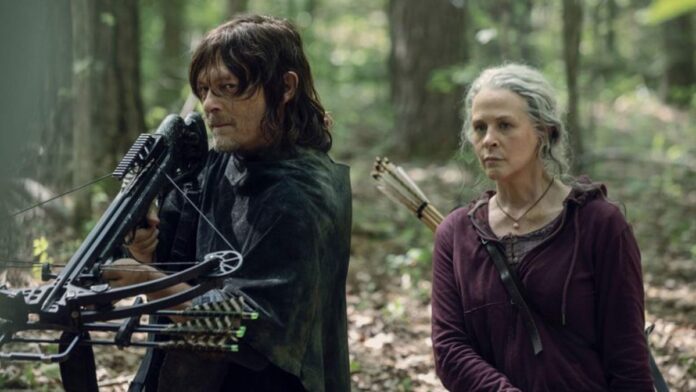 It’s tough to imagine a San Diego Comic-Con without The Walking Dead. What would that even look like?  But as the venerable series comes to a close with its final season, that’s a prospect we have to deal with. Then again, who knows what SDCC will look like in the years to come, anyway?

For now, Comic-Con @Home is where it’s at, and the panel for The Walking Dead‘s 11th and final season arrived. And, as is tradition expected by fans who would normally be packing Hall H, a new trailer has debuted. And there’s a lot going on here, much of which I won’t even pretend to know about. But there are some things I did pick up. The Reapers are new villains that look like they’ll be a deadly threat to the entire group; Maggie (Lauren Cohan) and Negan (Jeffrey Dean Morgan) are going to have some issues, as they should considering he murdered Glen years ago, and Carol (Melissa McBride) and Daryl (Norman Reedus) are still an awesome pair especially now as the seasoned vets of the crew.

I still maintain IF CAROL DIES WE RIOT!!! so she better live to see this show come to an end. What an unlikely survivor if that works out, eh?

Finally, the wait for that Rick Grimes movie is going to be a bit longer. Robert Kirkman held his own solo panel, and he said jokingly…

“It’s definitely going to be before 2032. I wish there were more updates. There’s a lot going on behind the scenes…and I’m as frustrated as you guys are that we’re not able to reveal everything to you and talk about it non-stop. But Andrew Lincoln is amazing. I miss seeing [him] run around as Rick Grimes. I can’t wait until we’re filming this thing and this thing is coming out. It’s gonna be awesome. Everyone is working very hard to make it as good as we can be.”

“We don’t want a bad Rick Grimes movie, right?” he added. “We want an amazing Rick Grimes movie. And so everybody behind the scenes is making sure that when this comes out it’s worth the wait and it is actually the special, character-building, Rick Grimes journey that everyone wants it to be. So we’re not going to be rushing this thing out and we’re gonna make sure that it’s perfect…When it finally comes out, when we’re showing trailers and stuff you’ll see. You’ll be like ‘That’s exactly what we wanted. I’m so glad they waited.’”

Personally, I liked The Walking Dead a whole lot more when they weren’t going out of their way to give fans what they wanted. That’s when I quit watching. Anyway…

The Walking Dead‘s 11th season debuts on AMC on August 22nd, however if you have AMC+ you’ll get episodes a week earlier.