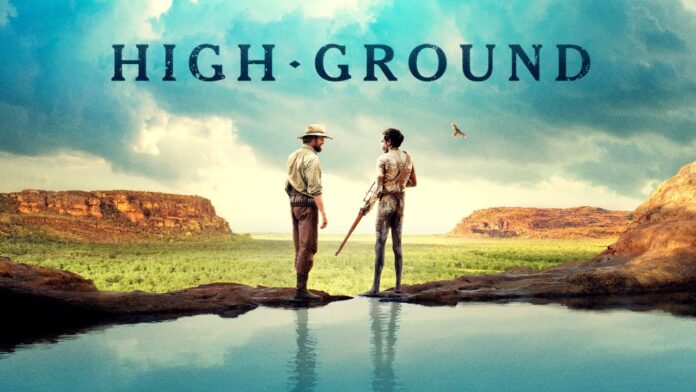 Of all of the under-represented and underserved in the history books Australia’s Indigenous people must be somewhere near the top. Perhaps in Europe they learn more about what these people have gone through at the hands of British colonialism, but somehow, I doubt it. Even sitting here writing this, I don’t know very much in terms of detail, outside of what Stephen Maxwell Johnson’s High Ground has illuminated. It seems to me that their story isn’t much different than the Native Americans who were forced from their homes, rounded up, and murdered if they didn’t assimilate and comply with the invading white man. These similarities make the Western feel of High Ground all the more appropriate in conveying that message. 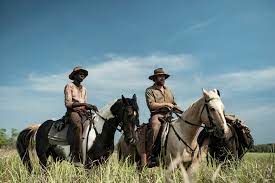 High Ground doesn’t take it’s sweet time to get started, opening up in 1919 on a group of British troops heading toward a tribe of Aboriginal families who don’t appear to be doing anything other then living their lives. The troops, on the other hand, are rifle in hand and moving with purpose. Among them is Travis (Simon Baker), who survived World War I as a sniper in the King’s service and appears to be the only one without direct malice in his heart. As expected, the confrontation doesn’t go peacefully and the result can only be called a massacre, with only three of the Brits left alive, Travis and two of his comrades, Eddy (Callan Mulvey) and the troop chaplain Braddock (Ryan Corr). While trying to come to terms with what he saw and was unable to stop, Travis finds an 8-year-old boy named Gutjuk hiding in the river. With no other choice, and to calm his feelings of guilt (or embrace them) Travis takes the boy with him to raise. 12 years pass when it’s discovered that troop outposts are being raided, burned to the ground, and having their inhabitants murdered. It doesn’t take long to find that they missed one survivor of the film’s opening massacre, Gutjuk’s uncle Baywara (Sean Mununggurr) who is out for revenge. The film’s main themes come into play as Travis and Gutjuk track down and attempt to stop Baywara, fully testing the loyalties and love of Gutjuk to his family and his adopted protector.

As you could probably surmise from that description the content of this film is ugly, dirty, wrong, and ugly. Perhaps that’s why it’s so surprising that the film itself is so breathtakingly beautiful. Honestly, I think the beauty of the film causes the ugliness of its content to hit home even harder.  Andrew Commis, the films cinematographer, may not be a household name yet but if he keeps producing shots like he did here it won’t be long until he’s on stage holding an Oscar. For all the terrifying aspects of the Australian Outback, it’s easy to forget how beautiful of a place it can be. Baz Lurhman’s Australia is the last film I can think of that really committed the wonder of that continent to film. This isn’t to give him ALL of the credit, no, Stephen Johnson’s direction is on point as well. The sweeping vistas and long shots invoke the best of what we think of when you hear Western, with a gentle touch on the character moments that bring you into the drama unfolding.

All of the pretty shots in the world won’t save you if you don’t get good performances from your actors, and that’s where Johnson excelled even further. Jacob Junior Nayinggul, who plays the older Gutjuk has the bulk of the heavy lifting, portraying the tear of his soul between family and friend. I still can’t believe this was his first film role. Simon Baker, who’s on the opposite end of the experience spectrum, delivers a solid performance with some real panache. His job wasn’t easy, he couldn’t just play Travis as a “good guy” 100% and the way he vacillates between what he knows is right and doing what he’s asked  for King and Country is seamless, all while displaying a real love for the boy he saved from that river.

Not knowing the history of these “Frontier Wars” it’s hard to comment on the historical accuracy. The film does have an obvious bias (deserved or not) and only really shows the violence committed by the white men against the natives, while choosing to show only aftermaths of Baywara’s raids. This isn’t to pull the old “there’s good and bad on both sides” BS, not in the least, I just think if they had really played out the action on both ends it would have made for a more complex narrative and furthered Gutjuk’s story. As it stands, it’s a bit harder to understand his loyalty to Travis. While he was taken care of by him for 12 years, he was old enough during the massacre to understand what was happening. Perhaps it’s that he knows Travis is the only one hunting Baywara that want’s to end things peacefully instead of putting him down.

High Ground is not feel-good family entertainment, it’s a tough story with tougher themes. That being said it holds in it some really important questions about love, loyalty, family, and vengeance that could stand to be asked in today’s day and age. A movie that will hold your attention, pluck at your feelings and bring to light some of the historical atrocities that haven’t hit the global front page. If none of that appeals to you, then you’ll want to watch just for the beautiful visuals shown throughout.