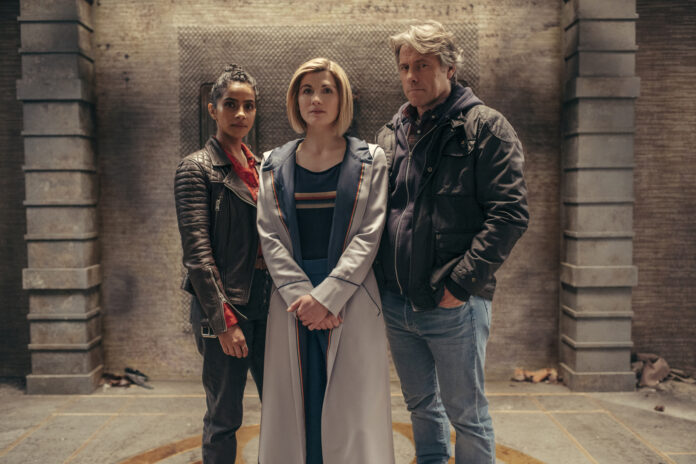 In the last episode of Doctor Who (“Revolution of the Daleks”), companions Ryan (Tosin Cole) and his grandfather Graham (Bradley Walsh) decided that they wanted to return back to their normal lives and opted to stop going on adventures with The Doctor (Jodie Whittaker).  Yasmin (Mandip Gill) opted to remain as The Doctor’s companion and will continue going on space and time-traveling adventures with the Time Lord.  The end credits of the episode teased a new Companion named Dan (John Bishop) would be joining the cast in the upcoming 13th season of the show.

The Comic-Con @Home panel for the upcoming season of Doctor Who provided a brief trailer of the new season, introduced the audience to the new Companion Dan, as well as a few more tidbits of the upcoming season of the show.  In the released trailer there was a blink and you’ll miss it moment showing a familiar face for us geeks.  In addition to John Bishop joining the cast, Game of Thrones vet Jacob Anderson (who played Unsullied leader Grey Worm in GOT) will have a recurring role as Vinder.

Showrunner Chris Chibnall also stated that the storytelling format of the show is changing in this new season.  While Doctor Who usually has an ongoing story arc, it often adopts an “Episode of the Week” format for the most part.  Chibnall confirmed that with this season of the show, Doctor Who will follow a serialized storytelling format and each episode will be episodic chapters for the entire season, similar to how pretty much every TV show does it nowadays.  Chibnall also commented that Covid has impacted the show’s filing (which is still ongoing with an anticipated late 2021 premiere), but instead of working on limited sets without monsters/aliens, they decided to “go big” while adhering to Covid protocols (newcomer John Bishop even commented how he still hasn’t seen some cast and crew members chins) and promise an outstanding season.

Be sure to take a look at the Doctor Who Comic-Con @Home panel and tune in to the 13th season when it premieres later this year.