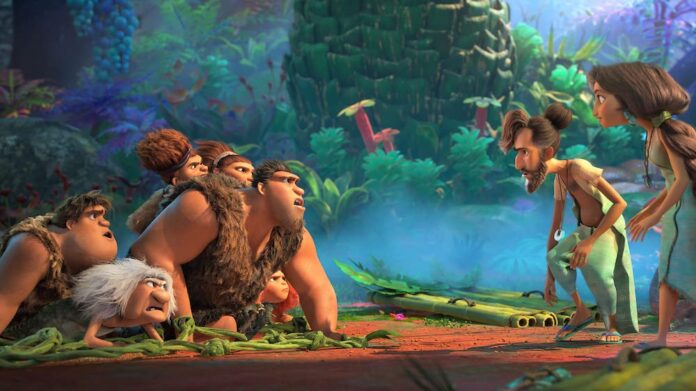 After the better part of a decade, the Croods are back in The Croods: A New Age. While it may have been 7 years for us, it’s been barely any time at all for The Croods and we pick up right where the first film left off. For those of you that need a refresher, the Croods are a prehistoric family of cavepeople just trying to survive. Led by Grug (Nicolas Cage) – a father who’s afraid of everything and always looking to hide in the nearest cave. Grug’s wife Ugga (Catherine Keener) who is the voice of reason and keeps Grug in check. Ugga’s mother Gran (Cloris Leachman) is a wild one despite her years. Grug and Ugga have three children – Sandy (Kailey Crawford), Thunk (Clark Duke), and Eep (Emma Stone). Sandy is the baby of the group and Thunk may be a lost cause – but not Eep. 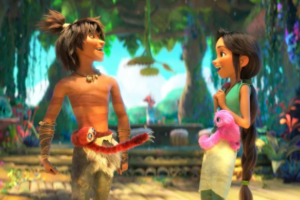 Eep is different, she’s adventurous and smart, and wants to see the world. Her boyfriend Guy (Ryan Reynolds) completely supports her. Guy’s family passed away tragically, but his mother’s last words were for him to follow the sun to find tomorrow. The entire Crood clan embraces that goal and they search for tomorrow together. This search leads them to the Batterman’s. The Batterman’s are the tomorrow that Guy’s mother’s words were leading him to. Phil Betterman (Peter Dinklage) and his wife Hope (Leslie Mann) have created a secure compound where they are raising their daughter Dawn (Kelly Marie Tran). Dawn and Guy were childhood friends and the Batterman’s have decided that they belong together. They begin manipulating everyone and everything to make sure they get their way, regardless of what it does to Eep and Guy’s relationship.

Dreamworks didn’t rush to pump out a sequel to The Croods. Too many franchises are derailed by constant sequels that never live up to the original. That’s not the case here – Dreamworks took their time and got it right. The Croods: A New Age is led by a new director in Joel Crawford with a new writing crew spearheaded by Kevin and Dan Hageman. Impressively, they were able to seamlessly capture the magic of the original film. This is not an easy task, but the humor and adventure were all just as prevalent in the sequel as the original. A big part of The Croods is the creative world they live in. Crawford and his team build upon this notion and continue showing the audience the amazing world that The Croods are braving, trying to find home.

The colors and animation are truly eye popping throughout the film. Croods: A New Age looks absolutely fantastic and allows the audience and creative team’s imagination to run rampant. The creatures the Croods encounter are in no short supply – with some serving as adversaries and others comic relief. Introducing the Bettermans was a clever way to keep the story fresh. Their interactions with the Croods are priceless and their ‘technology’ leads to multiple hilarious hijinks. The Hageman’s and their writing team subtly repeat jokes perfectly as the film progresses, a successful technique when properly executed. The voice actors turn in strong performances as well that help to progress the narrative and connect with the audience. All in all, The Croods: A New Age is a sequel worthy of any time period and absolutely one that should be watched and enjoyed.