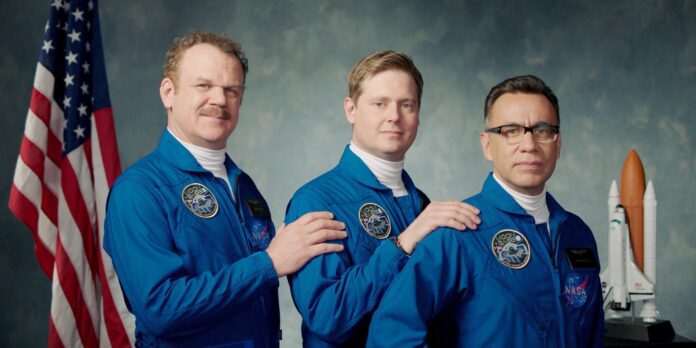 Fred Armisen (SNL, Portlandia), John C. Reilly (Step Brothers), and Tim Heidecker (Us, Tim and Eric) are trying their best to make it to space in the new trailer for Showtime’s Moonbase 8. The A24 produced comedy “follows eager astronauts Skip (Armisen), Rook (Heidecker), and their leader Cap (John C. Reilly) as they attempt to qualify for their first lunar mission.” Joining them in the trailer seems to be Alia Shawkat (Arrested Development, Search Party), current lead singer for queen Adam Lambert, and Thomas Mann (Lady and The Tramp, Me and Earl and the Dying Girl) as skeptical recruits.

This is the fourth space centered show to come out this year (not even including the Star Trek franchise), boldly going where HBO’s Avenue 5 and Netflix’s Away and Space Force went before it. To me, it looks a bit like Spaceship Earth, the documentary about the biosphere program that was supposed to simulate what life might be like on another planet. To know for sure, you can catch Moonbase 8 on Showtime on November 8.