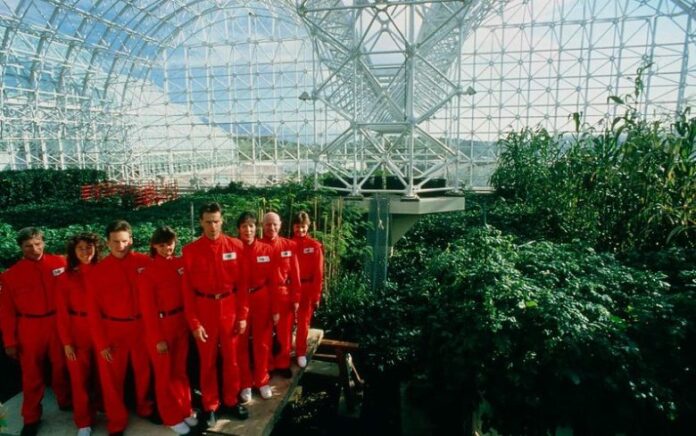 Most Americans have been quarantining in their homes for the last month and a half. Imagine trying to do that for two years. Spaceship Earth documents the buildup and fall of a 1990’s experiment, Biosphere 2, where eight individuals lived in worked inside an ecological biosphere. Paid for by billionaire Ed Bass, and headed by a hippie-esque collective, eight human beings lived and worked inside the facility, housing multiple environments, animals and thousands of plants. Causing a media sensation, the good-intentioned project soon turned sour when human nature took over. Director Matt Wolf tries to unravel what exactly happened and who was responsible, with mixed results.

Spaceship Earth is told through archival footage and interviews. Wolf allows the footage to speak for itself, letting sweet orchestration and the well-documented past do the talking. At first, the group behind  Biosphere 2 come off as slightly annoying idyllic dreamers, as if theater and philosophy students had access to millions of dollars. This sentiment doesn’t go away and leaders in the project, such as John Allen and his wife Marie Harding, come off as narcissists who can’t admit they made a mistake. As the film progresses, you can’t really root for anyone. The crew is so focused on being right and making sure the experiment worked that they still don’t seem to take responsibility for its outcome.

With its two hour runtime and a very slow pace, Spaceship Earth has fundamental story structure issues. Too much information and details that don’t give the story momentum, slow it down. This could have been solved by adding a narrator or some buffer between its audience and its subjects. It hints at some of the more philosophical problems with the project, such as sexism and how no people of color were included in an experiment rooted in building a better world. Ultimately, Wolf decides to pass those very valid questions over.

It’s a frustrating and at times fascinating documentary about the ego it takes to change the world. In the end, Spaceship Earth is exactly like Biosphere 2, an interesting idea that was executed poorly.

Spaceship Earth is available on Hulu and VOD. For other places and ways to watch click here. Watch the trailer below.