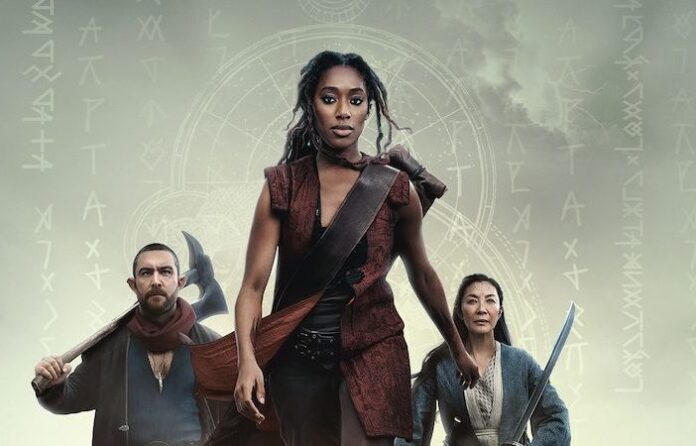 The replacing of Henry Cavill with Liam Hemsworth as Geralt of Rivera may have shaken up The Witcher‘s fans, but Netflix’s franchise is alive and well. Coming up is the four-part prequel series The Witcher: Blood Origin, which puts Michelle Yeoh in the lead role at a time when she’s a red-hot Best Actress contender for Everything Everywhere All At Once. The timing couldn’t be better.

For obvious reasons, much of the early footage has centered on Yeoh’s badass warrior character, Scian. This latest trailer puts the spotlight on Sophia Brown as Michelle Yeoh’s character Scian, the latest trailer gives her co-stars, Sophia Brown as Éile and Laurence O’Fuarain as Fjall, formerly sworn enemies who have joined forces to save the Continent from evil magic that has begun to tear at the fabric between worlds.

Fans who stick around to the end will get a surprising treat. The arrival of fan-favorite bard, Jaskier, played by Joey Batey. Considering the series’ events are 1200 years prior to The Witcher, his arrival will need some explanation. But it likely has to do with Minnie Driver’s character Seanchai, s a shapeshifter and collector of lore who has the ability to traverse time and space.

Taking place in the elven Golden Era, 1200 years before the time of Geralt, Yennefer and Ciri, ‘The Witcher: Blood Origin’ tells the story of seven strangers who join together to fight an unstoppable empire. Though they hail from warring clans, Éile and Fjall must learn to trust one another if they have any hope of leading this band of outcasts on their quest to topple the Continent’s oppressors. But, when gateways to other worlds are opened and a power-hungry sage unleashes a new weapon, the Seven realize they must create a monster in order to defeat one…