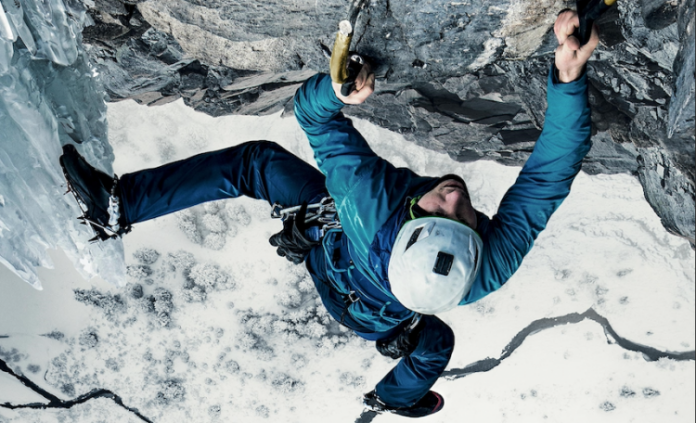 Veteran filmmaker Peter Mortimer (The Dawn Wall) and fellow director Nick Rosen set out to document the infamous Alpinist climber, Marc-André Leclerc.  A 23 year old and free-spirited Canadian who makes some of the boldest solo ascents in history. However, he intentionally draws little attention.  Marc-André, being publicly shy, prefers a nomadic lifestyle and climbing alone. He chooses not to own a phone or car and is always looking for the next big adventure. Leclerc is open to let Mortimer and Rosen’s crew follow him but sitting him still for long proves more difficult.  Marc-André does not want to deter from improving his technique and spiritual connection to climbing. Then, Leclerc embarks on a historic expedition in Patagonia that will completely redefine his skill set and raises the bar to other climbers in the world.

The Alpinist exquisitely exposes Leclerc’s heart pounding venture and the limits he pushed to master a craft so complex and dangerous to acquire. Mortimer and Rosen spend two years documenting the passion driven world of Leclerc. Marc-André directly states that all he wants is to simply have “a casual, fun adventure”. However, the two directors and crew struggle to keep up with the elusive subject and eventually, Marc-André himself. Family, friends, anyone who have crossed paths with Leclerc give loving and inspired insight of their experiences with him. His shining light has touched so many lives including the love of his life and climbing partner, Brette Harrington. As well as fellow climbing enthusiasts, Alex Honnold, Reinhold Messner, and Barry Blanchard just to name a few.

The Alpinist admittedly covers an impressive subject yet, Marc-Andre’s vision and purpose is not fully respectably conveyed by the filmmakers.  Leclerc respectively allows viewers to see his truest self, even at times when he doesn’t want to be seen. However, the chase to see Leclerc in action despite the surrounding danger is frustrating. Don’t rush a guy who’s life literally depends on mental peace and clarity while daring to go beyond the norm. There’s almost no music or pieces of data to read through but that’s not a bad thing. The film does beautifully pair the natural ambiance of white noise to its visually breathtaking imagery. Watching Marc-André climb through rock, ice, and snow with such precision, ease and comfort is absolutely captivating. He keeps you on the edge of your set as he climbs insane depths of the world’s toughest Alpine’s. His confidence kept me calm as I watched him cling on to the tiniest edges of some seriously vulnerable cliffs.

The Alpinist is a magnificent documentary film that will open your eyes, mind, and heart to Alpinism. Mortimer and Rosen’s crew follow/interview people who are expertly transfixed on this highly technical and death defying sport. Enthusiasts share their greatest stories, goals, and desires of solo mountain climbing. They aspire to reach the tallest and most dangerous points in the world. Marc-André Leclerc is a one of a kind, old soul who is and should always be recognized as a humble hero of his craft. The people are intriguing and the footage/images captured by drone are phenomenal. Highly recommend checking this film out.

The Alpinist will be released in theaters September 10th.