Home Reviews Khalil Review: ‘It Snows All The Time’A Family Must Cope With Dementia In...
Facebook
Twitter 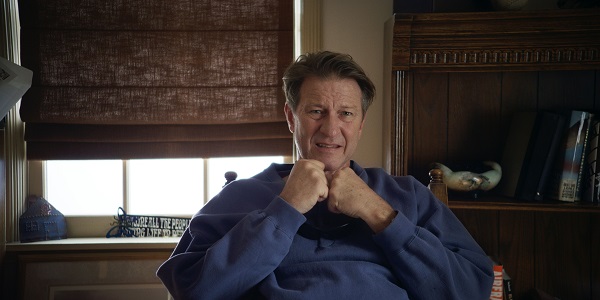 Dementia is rough. Just the thought that you no longer have control over your mind is frightening. Not only that, but it also affects everyone around you. Your family has to watch you shrink into a shell of what you once were, and they also must figure out the best way to take care of you while you are now much more vulnerable than you once were. Such things can take a toll not only on the person affected, but their family as well. Unfortunately, It Snows All The Time doesn’t do a great job illustrating this problem.

Based on a true story as the end credits will remind the audience, Jesse (Erich Hover) comes back to his hometown in Omaha after leaving for a job in Los Angeles to visit his family. At first, everything seems fine. He’s ribbing his brothers’ Art (Sterling Knight) and Tony (director Jay Giannone himself) as though everything is fine. He immediately notices that something’s “off” with his father Paul (Brett Cullen). The yard that his father loves to work on is in shambles. Paul is not working anymore as he was forced out of his job due to the “golf cart incident,” and he’s forgetting things. Paul’s wife and matriarch of the family Anne (Lesley Ann Warren) are barely holding it together. She’s trying to stay strong for the family and put on a brave face, but there’s so long you can remain in denial.

As Jesse starts raising questions about what’s going on with Dad, it creates tension in the family. Paul has been putting off going to the doctor for any cognitive tests, but it’s clear they have to address the elephant in the room. Slowly but surely, they make an appointment for follow-up testing for Paul, and then it’s revealed that he has dementia. With him being only 58 (and relatively young for a dementia diagnosis), this sends a shockwave through the family as they have to try and figure out how to navigate their new normal.

As Jesse is dealing with his own drama (his girlfriend says he’s spending too much time with his family and breaks up as well as reuniting with his hometown ex-girlfriend), after Paul doesn’t remember him by name, he decides to go on a solo road trip with his father in the hopes of helping him remember and have a sense of calm and peace. While the road trip serves as a fun bonding moment between the father and son, but his dementia causes a few issues for him. From yelling at strangers to getting lost in the woods, Paul’s disease isn’t going anywhere, and the family has to work within those confines. Towards the end of It Snows All The Time, there is a moment of peace as everyone comes to terms with Paul’s disease and even celebrates them being a family.

It Snows All The Time should work as a touching way to look at dementia, but unfortunately, the script doesn’t work very well. The unnecessary family drama feels forced, as does Jesse’s reconciling with his ex-girlfriend (and a waste of Orange Is The New Black’s Taryn Manning). In fact, that entire storyline could have been cut from the film and it wouldn’t have made a difference in the overall narrative of the film. Brett Cullen seems to be the only one putting in a strong effort acting-wise as Paul as he navigates having dementia (as well as Lesley Ann Warren as the matriarch of the family) as the rest of the cast seems to be in another film. Jay Giannone’s directing is decent for a first-time feature-length film except for one scene where a bar fight is manufactured and the choreography during that scene is just not believable. There is a touching montage at the end of It Snows All The Time to remind the audience that this film is a true story, which helps save the film, but overall the film leaves more to be desired.