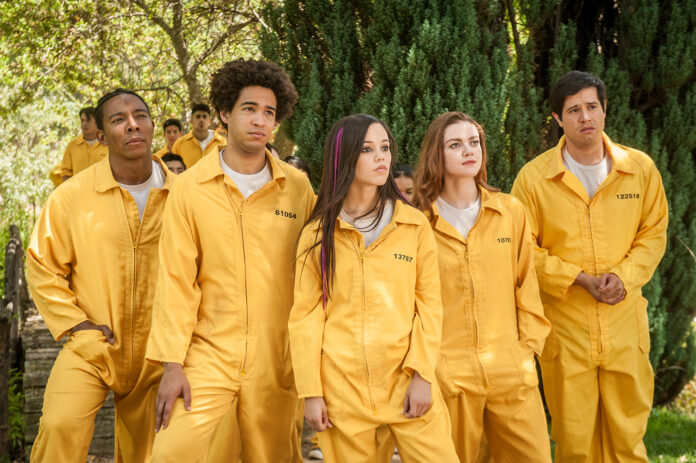 American Carnage opens with a montage of various news reports, TV footage, and speeches on the subject of immigration. None of it comes across as very welcoming; immigrants, whether they be documented or not, are depicted as dirty criminals, scourge of the hard-working white man, and the antithesis of pure American values. Of course, it ends with the words of the orange former occupant of the White House during his infamous “American Carnage” speech. Clearly, director and co-writer Diego Hallivis has a lot that he wants to say. Fortunately, he doesn’t let the politically-charged message get in the way of an entertaining comedy-horror featuring some of the best rising stars in the business.

We’re introduced to JP (Jorge Lendeborg, Bumblebee), a Texas teen working at a crappy fast food joint to help support his mom, while his older sister Lily (Yumarie Morales) prepares to attend the college of her dreams. Day in and day out JP deals with entitled white people crapping on him and his station in life, but he deals with it in stride. All of that comes to an end when racist governor and likely Presidential candidate Harper Finn (Brett Cullen) issues an executive order to arrest all of the children of undocumented immigrants. When ICE (who are federal and shouldn’t be listening to a governor, but whatever) swoops in and busts up a celebration party, JP and Lily are detained, separated from one another.

This is all in set-up to a silly horror that leans more into being funny than anything gory. That said, it’s still extremely disturbing how Hallivis sees the end game for America’s extremist right-wing fearmongering against immigrants. JP, along with a group of other captured youngsters, are given a choice of either deportation or joining a program where they act as caretakers for the elderly (the acronym is a dead giveaway), with the presumption that when completed they will be free to return home. Of course, nothing at this facility is as it seems. The elderly people they are meant to care for aren’t very responsive, and some act a little…well, they act like zombies.

JP finds himself surrounded by a motley crew of rowdy teens much like himself. The ubiquitous Jenna Ortega (Scream, X) continues to leap from one horror to the next as the outspoken Camilia, while Allen Maldonado (The Wonder Years) is the loud-mouthed Big Mac, Jorge Diaz (Head of the Class) is the timid Chris, and Bella Ortiz (Our Ladies of Brooklyn) is Micah, a sexy Argentinian mocked by the others for her lighter skin that allows her to pass for white.

With Eric Dane as the shady head of the nursing home, American Carnage begins to take a tongue-in-cheek attitude towards the tough issues it initially presented. That might bug some viewers, but others will appreciate its use of ominous atmosphere and comedy to imagine a bleak future if the racists continue to gain a foothold in our government. One of the scariest things about the film is that Harper Finn isn’t that different from the crazed politicians getting voted into office right now.

While the production team does an amazing job to mine every ounce of creepiness from such a bleak nursing home, occasionally the absurd tone has a detrimental effect on Hallivis’ core themes. It isn’t just racism and xenophobia that he’s interested in, either, but also the way we treat our eldest citizens. Most of the teens are grossed out just being in the presence of old people, and they are treated like garbage the entire time. Also, it’s clear the budgetary limitations in the final stretch, with certain facial deformities looking laughable when they should make us uncomfortable.

Drawing inspiration from The Purge and the racially-charged social thrillers of Jordan Peele, American Carnage isn’t afraid to be shocking, funny, or to piss off those on the other side of the ideological spectrum. As the true nature of the facility comes to light, along with the broad scope of its horrific purpose, it’s possible that both sides will agree that fast food restaurants and nursing homes should be neutral ground.

AMERICAN CARNAGE will be in theaters and VOD & Digital July 15th.