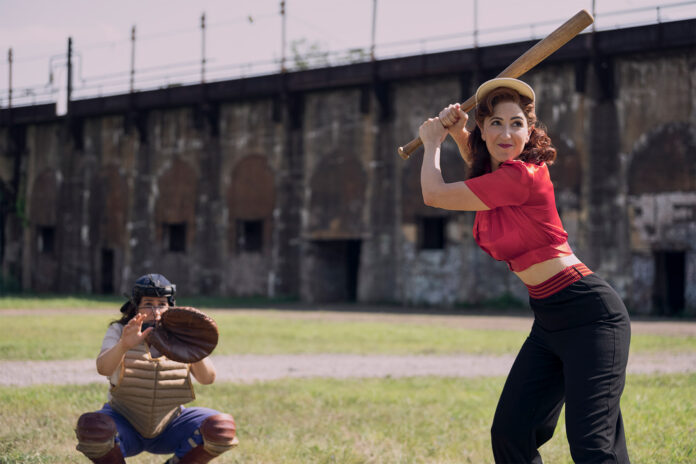 “There’s no crying in baseball!!”

Even if you’re too young to have been around when Penny Marhsall‘s A League of Their Own was released in 1992, chances are you know that iconic line, delivered incredulously by the great Tom Hanks. The film is a stone-cold classic, and I daresay one of the truly great American stories of all-time, and one that is damn near untouchable. You wouldn’t DARE try to remake it. But reimagine it as a series? Well, Amazon Prime Video is up to that challenge.

Co-creators Will Graham and Abbi Jacobson (of Broad City fame) have taken the story of women who joined an all-female baseball league in WWII and given it their own spin. The series covers an entire generation of women in the All-American Girls Professional Baseball League, a real league that existed from 1943-1954 and started while men were away fighting in the war.

Jacobson, Chanté Adams, D’Arcy Carden, Roberta Colindrez, Gbemisola Ikumel, Kelly McCormack, and Priscilla Delgado are among the ladies taking the field. Nick Offerman also has a role, while Rosie O’Donnell, who starred in the original movie, will make at least one guest appearance.

This isn’t the first attempt to turn A League of Their Own into a tv show. I remember well the short-lived 1993 series that mistakenly made Sam McMurray’s Coach Jimmy Dugan the center of attention, and not the female cast. It also tried to cast itself as a continuation of the movie, which heaped on way too many expectations. Fun fact: Tom Hanks actually directed an episode.

A League of Their Own swings for the fences with all eight episodes hitting Prime Video on August 12th.