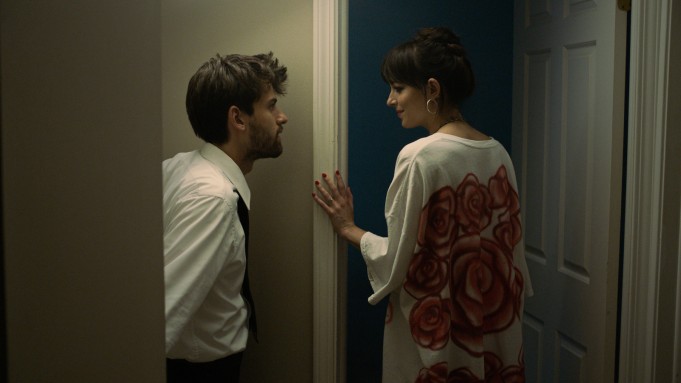 NOTE: This review was originally part of our 2022 Sundance Film Festival coverage.*

There’s a good chance people will be turned off by the gentle, nakedly earnest comedies by Cooper Raiff. A breakout award-winner at SXSW for his college freshman rom-com Shithouse, Raiff returns with Cha Cha Real Smooth, which in a lot of ways is like a spiritual sequel. If I’m being perfectly honest, Raiff didn’t impress me as he did others with his previous effort, which tried too hard to check all of the indie darling boxes. But Raiff has won me over with an open, honest, and yes damn funny story about two people who enter one another’s lives and make them better, without having to give in to any romantic formula.

Raiff once again writes, directs, and stars, playing post-college slacker Andrew, who uses that Tulane degree for a dead-end job at a sandwich shop and a room at his mom’s (Leslie Mann) house, where she lives with her prickly boyfriend (Brad Garrett). Andrew is a genuinely sweet, empathetic sort; when we first meet him it’s as a boy being rejected by an older woman he spills his heart out to. His party days at university behind him, Andrew once again is smitten by a woman his senior. While working as a party starter at a bat mitzvah attended by his younger brother David (Evan Assante), Andrew’s skills getting kids to hit the dance floor catches the eye of 32-year-old Domino (Dakota Johnson), a lost and somber mother to autistic teen  Lola (terrific Vanessa Burghardt, who is actually autistic).  He easily wins over the hard-to-please Lola, winning a bit that he could get her to dance with the other kids. The way he does it is the same way he wins over Domino: by being there, by listening, and genuinely showing care and interest.

All of the people in Cha Cha Real Smooth are looking for that someone who will treat them with simple kindness and attention. Andrew is a people pleaser, and at first, it comes across as a little bit insufferable. But Raiff has no illusions about any of it; Andrew CAN be insufferable, but he’s also charming and self-destructive while being fully aware of it. There are no delusions of grandeur when it comes to Andrew, he just is who is he, the whole messy package. And the same goes for Domino, who right from the start is so aloof, and yet bristling with strength. We immediately sense there’s something broken about her, and yet still she’s way out of Andrew’s league. Andrew has to earn our belief in their chemistry, and boy does he ever.

Andrew proves himself worthy in more ways than one. Lola, who wears her headphones and usually plays board games at these party events, is used to being bullied by the other kids. It’s Andrew who comes to her defense, listens to her, and genuinely puts her interests first. His kindness awards him a babysitting gig, caring for Lola when Domino isn’t around, which on top of their meetings at parties leads to a job as the girl’s babysitter.

And that means spending a lot of time with Domino. It’s not easy to pull off a movie where an apparent loser like Andrew just happens to encounter someone who looks like Dakota Johnson, and she’s a lost soul, too? No way. But Raiff pulls it off, largely because his and Johnson’s performances are so natural. There’s no hint of Raiff being outclassed by Johnson, who has been on an incredible roll of late. Cha Cha Real Smooth, taken from the party anthem track by DJ Casper, is so open-hearted as to be uncomfortable, at times. Opening oneself up to another in the way Andrew does comes with risk, especially if the recipient isn’t in the headspace to accept it. But there’s humor to be mined from that, as well as understanding. The platonic energy between Andrew and Dominio is such that you wait and wonder if Raiff will turn him into the romantic hero. But Raiff defies all expectations, and while the conclusion proves bittersweet, it is also undeniable real and human. Cha Cha Real Smooth is one of those films that is destined to be one of this year’s discoveries. It has festival awards in the future and sets Raiff on a course for even bigger things in the long run. A true gem.