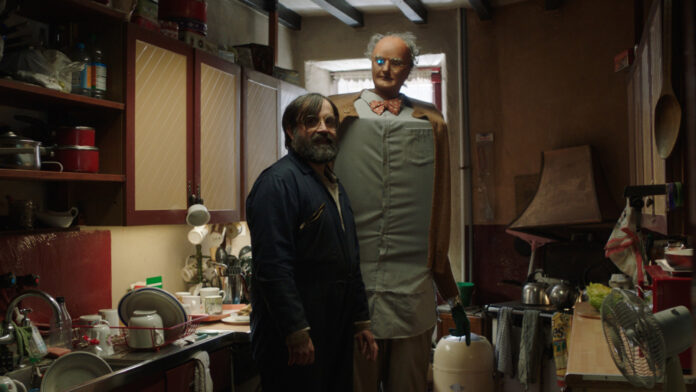 Brian is a lonely inventor living by himself in a Welsh valley, longing for a companion. In the meantime, he has a film crew following him around documenting his work. Part of this year’s Sundance World Cinema Competition, director Jim Archer’s Brian and Charles is a delightful and slightly dark original tale about two friends learning to support one another.

While out in the countryside one afternoon, Brian finds an old mannequin head laying in the dirt. Three days later, he’s added an old washing machine and spare parts to create a robot that doesn’t work. After a night of going into town and gathering supplies, Brian realizes that a storm caused Charles to turn on.

Starring as the film’s first titular character is David Earl, who co-wrote the screenplay with Chris Hayward. They both worked with Jim Archer on the 2017 short film of the same name. Earl is probably best known in the United Kingdom for his work with Ricky Gervais on Derek and After Life. Hayward puppets Charles and provides his edited AI-like voice.

The film’s first half is a delightful ode to Mary Shelley’s Frankenstein and British oddball comedies. The robot reads the entire dictionary and insists his name is Charles Petrescu. He can easily be bribed with cabbages from the farm’s garden. The humor and mockumentary style explanations to camera are reminiscent of another Sundance darling from 2014, What We Do In The Shadows.

The joy Earl exudes as Brian towards Charles is infectious, like a proud parent. Though not a complete portrayal of Victor Frankenstein by any means, Earl’s performance is more of a sweet overprotective parent rather than a mad scientist. When the town bully and known thief Eddie Tommington (Jamie Michie) starts to notice odd things happening on the farm, Brian’s fear forces him to keep his new companion a secret instead of dealing with the problem head-on. Like any child, Charles starts to question the rules, causing a divide between them.

Eventually, the mockumentary style fades away once the emotional and dramatic conflict arrive. Without the acknowledged presence of the camera, the story feels less whimsical and more heavy and dark. The inconsistency creates a tonal imbalance and though the script eventually gets back on track, it’s enough to take away from an otherwise delightful viewing experience.

With quotable lines and sweet performances by Earl, Hayward, and Sherlock alum Louise Brealey as Brian’s love interest Hazel, Brian and Charles has all the trappings of a future cult classic.