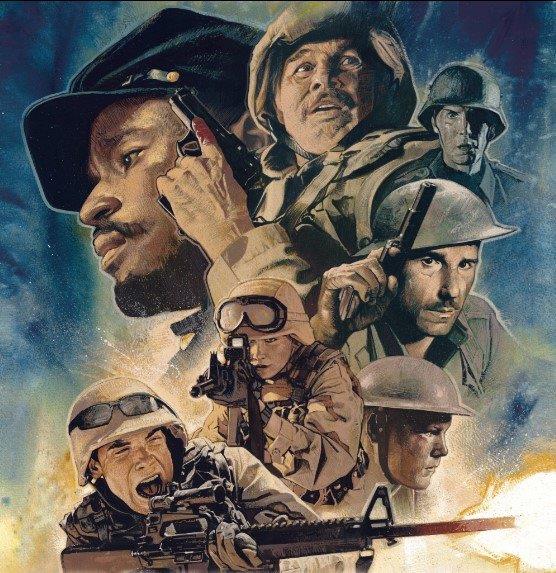 It has been said that the theater of war can be summarized in moments of sheer boredom, and sheer terror. Soldiers can spend plenty of time is spent waiting for the action to happen, but when it happens, it’s complete chaos, confusion, and quick second life or death decision making. While most war films tend to overly dramatize the backstories and histories of the soldiers they focus on in films, Foxhole does the opposite and instead highlights the theater of war itself.

Focusing on 36 hours of three separate wars: The American Civil War, World War I, and Iraq, writer/director Jack Fessenden showcases just how unique war can be while waiting in a foxhole for the action to happen. Using the same actors for each time period, Fessenden helps breed familiarity with the characters, even if they are different in each subsequent war. The one theme that is prevalent throughout the 95-minutes of Foxhole is that even in the calm before the storm, soldiers have to think on their feet as one bad decision could cost them their lives.

The first time period in Foxhole is during the American Civil War. As a group of union soldiers are waiting for a Confederate offensive in a foxhole, they come across a wounded African American Union soldier. Unlike the other two wars covered in Foxhole, the Civil War was about race and slavery. Even though these Union Soldiers are literally fighting the rebels to dismantle the institution of slavery, that doesn’t mean they don’t have their own prejudices. Should they abandon their post to save a black soldier? At least one of the soldiers drops a few n-bombs and isn’t 100% good with saving the young, wounded soldier because he’s black, even questions if he’s truly a free man or possibly a runaway slave. In addition, the wounded soldier gives them intel that a massive Confederate troop buildup is coming their way, and it’s only a handful of them defending the position. Is this war even worth it?

The second war covered in Foxhole is World War I as a group of American troops are holed up in another foxhole. This time they have come across a German soldier and take him prisoner. Here, the soldiers have a debate over ethics in a time of war. The German soldier is the enemy, but is he really? He’s fighting for what he believes is just, the same as they are. Should they treat him as a prisoner and give him compassion since he willingly surrendered, or should they execute him out of the fear that he would slit their throats the first moment he gets? The moral authority of the group states that they are Americans, and will set an example and not be as ruthless as their enemies might possibly be. But will that be good for them, or could it bite back at them?

While the first two timelines focus on the ethics of war, the third one in Foxhole is just about survival. Taking place during the Iraq war, a group of soldiers are in a Humvee, which replaces the traditional foxhole they remain in as times have changed, when they come under fire from insurgents. The theme for the third act is about taking care of your brothers in arms. One by one, bullets graze different soldiers holed up in the Humvee and they must decide whether to abandon the vehicle for the open terrain, but in doing so they would be forced to leave behind their fellow soldiers too injured to move. It is one of the most heartbreaking of the stories because the stakes are incredibly high for the soldiers trapped by enemy fire and they might not make it out of it.

While Foxhole is an ambitious film, it is constrained by its budget. Each time period in the film is limited to one location that it almost feels like this would have been better served as a play in a theater. It would still capture the drama and powerful dialogue without having to be hampered down by being in one location. Director Jack Fessenden also makes an interesting artistic choice as he makes the American Civil War in full color, while World Ward I is filmed completely in black and white. It does showcase the coldness of the first World War, but it doesn’t make much sense from a display perspective, especially if the film showcases an older war in full color.

Foxhole also displays the progress made in America through its treatment of soldiers that are women and people of color. In the Civil War period, black soldiers were up for debate whether they would receive medical care, even though they were literally fighting for their freedom, they were still second-class citizens as best, and property at worst. In the World War I scenes, the black soldier wasn’t even allowed to have a gun on the battlefield. However, during the Iraq war, the same black soldier is the leader of the platoon, and a woman is the Humvee driver. Foxhole slyly showcases that progress has been made in the military, and when the military moves forward, so does the country. Towards the end of the film, there is some smart editing to tie all the different timelines together. I haven’t seen a great use of combining themes across timelines in such a poetic way like this since the ending of Cloud Atlas, and that’s not bad for a second-time director.

Foxhole premieres today in select theaters and On Demand.