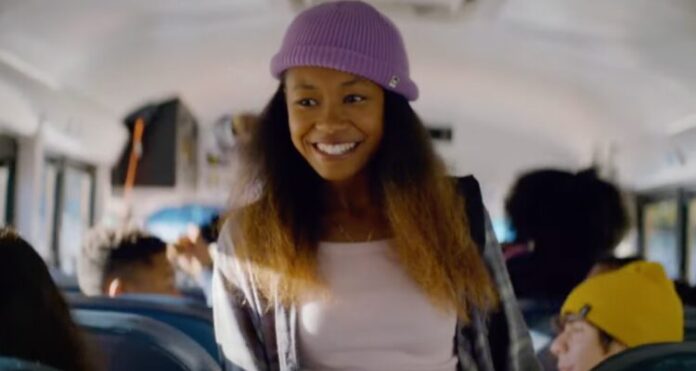 Is there anyone who hasn’t loved Sanaa Lathan since Love & Basketball? Okay, sure, you could also add her earlier roles in Blade and The Best Man, but it was that sports romance-drama that really made her a star beloved to this day. And she’s taking her career to a brand new place with On the Come Up, a Paramount+ film that marks her feature directorial debut.

Lathan’s On the Come Up is based on the novel by The Hate U Give author Angie Thomas, and centers on Bri, a young Black girl who hopes to live up to her father’s legacy by taking the battle rap scene by storm. However, her first track goes viral for unforeseen reasons, and she must decide whether to be true to herself, or the game.

This is something that Lathan has been building up to, having directed and starred in the Leap segment of last year’s With/In anthology.

On the Come Up will stream on Paramount+ soon but doesn’t have a firm date.

Bri (Jamila C. Gray), a young black girl, attempts to take the battle rap scene by storm in order to do right by the legacy of her father—a rapper whose career was cut short by gang violence—and to help her family climb out of poverty. But when her first hit song goes viral for all the wrong reasons, she finds herself torn between the authenticity that got her this far and the false gangsta role that the industry wants to impose upon her. Based on the New York Times #1 best-selling YA novel by Angie Thomas (who also penned The Hate U Give), On The Come Up is punctuated by the comedic talents of Mike Epps, hip hop heroes like Method Man and Lil Yachty, and the lyrical prowess of Rapsody.