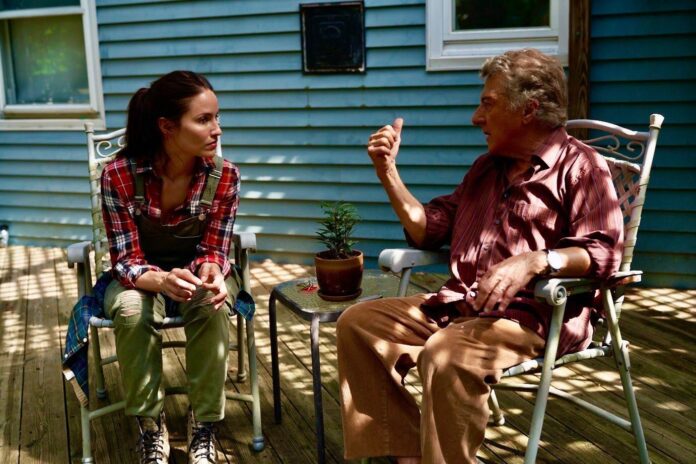 Since the start of her career playing the titular character on Blossom and a young Bette Milder in Beaches, Mayim Bialik has had many roles. From crunchy mom to neuroscientist to starring in CBS’ The Big Bang Theory and Call Me Kat to Jeopardy host, her public persona has changed throughout the years.  She is now trading them in for the title of writer/director in the new film, As They Made Us.

Cashing in on themes of generational trauma and overbearing mother figures that seem to be dominating pop culture right now, Bialik’s first directorial effort follows a young, Jewish, divorced mother of two, Abby (Dianna Agron). Her life is fully entwined with her parents’, constantly getting caught up in her overbearing mother Barbara’s antics (Candice Bergen), and her father Eugene’s deteriorating health (Dustin Hoffman).

As his death approaches, Abby starts to examine her childhood and relationship with her estranged brother Nathan (Simon Helberg). Throughout As They Made Us, we see flashbacks giving reasons for her brother’s absence and her own for staying. Bergen and Hoffman play their characters at every age, often without any attempt to practically de-age them other than a wig. Bergen’s overbearing and borderline verbally abusive mother is astounding. She takes Bialik’s dialogue and wields it like a knife, making you not realize the extent of her words until after she strikes.

Dianna Agron carries most of the film, giving a quiet and grounded performance unlike we’ve seen from her in the past. Known mainly for her role on Glee, the 35-year-old has been taking more and more interesting roles, stepping away from the teeny-bopper TV show with choices like the unnervingly brilliant Shiva Baby and The Laureate. As Abby, Agron’s performance highlights the feeling women know too well – taking on the responsibility and burden of everyone around her.

While Bergen and Agron’s performances are Bialik’s greatest assets, her greatest weakness is her own script. Most of the dialogue feels on the nose and the emotional journey Abby goes on has little payoff. Her use of Hoffman is maybe her most interesting and puzzling choice. The 84-year-old actor was accused of sexual misconduct by seven different women in 2017. Since the allegations, Hoffman has stayed off the screen until now. Could Eugene, an older senile Jewish man who used to slap his kids around, be played by another actor? Absolutely. Why Bialik insisted on casting him is baffling. However, she makes sure the film’s primary focus is on Bergen and Agron, giving us a tolerable amount of Hoffman.

While As They Made Us feels like a personal film for Bialik, the attempt feels a little trite. We’ve seen these stories of generation trauma before and done better. While there are some shining moments in its 90-minute runtime, for the most part, it doesn’t justify its existence.

As They Made Us is in theaters and on VOD. Watch the trailer below.