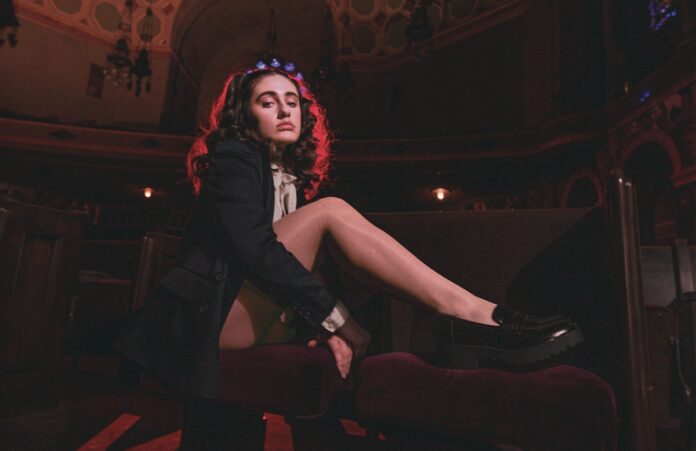 Shiva Baby might be the ultimate cinematic example of how to build tension. With each look from Rachel Sennott’s big doe eyes to every symphonic twang from Ariel Marx’s score, everything we experience is a purposeful and calculated attack on the senses. Writer/director Emma Seligman expertly stacks tension layer by layer to create the ultimate Jewish/bisexual dysfunctional comedy you can’t look away from.

Taking place in the course of a few hours, the film focuses on Danielle (Rachel Sennott), a young Jewish woman, just graduating from college and living off of her wealthy parents (Polly Draper and Fred Melmed) and a few New York City sugar daddies. When we first meet her, we see her leaving Max’s apartment (Danny Deferrari), with fresh cash and a new bracelet on hand. She arrives at a shiva for a distant relative, eager to cash in on the connections and free food. Right away she faces the badgering of her parents, who are bluntly attacking her with kid gloves. It’s the first of many well placed attacks by Emma Seligman leading up the big reveal that Max is also attending this same shiva with his gorgeous wife (Glee’s Dianna Agron) and their crying baby.

Nobody is safe under Seligman’s lens. Each character is realistically unlikeable and problematic for one reason or another. Danielle is extremely opportunistic and seemingly uncaring, every “good” thing she does for the new widow of the house is performative.  The Shiva Baby vibrates with brilliant anxious intensity – a perfect example of “the uncomfortable comedy,” where you don’t know If you should laugh or scream at the screen.

As her lead, Rachel Sennott fluctuates between empathetic and an absolute nightmare at the drop of a hat. The plot, emotion, tension all ride on her shoulders and Sennott takes a make-or break character and turns it into a star making performance. In what is sure to be her seminal role, Sennott’s layered Danielle is a spellbinding performance that you can’t look away from – in horror or in awe.

Molly Gordon, playing Danielle’s high school rival and old girlfriend, provides us with a calmer presence on screen that is just as fantastically frustrating as the others. In projects like Booksmart, Life of the Party, and The Broken Hearts Gallery, Gordon played mostly quiky or misunderstood secondary and tertiary characters. With Shiva Baby, we not only see a different side to Gordon, we see her being pushed to the forefront, one or two roles away from playing the lead in her own comedy.

Playing a very similar overwhelming Jewish type in 2014’s Obvious Child with Jenny Slate is writer/director turned actress Polly Draper. Seligman smartly and constantly refers back to Draper, relying on her character to pivot the comedy from sentimental to uncomfortable and back again. Though many of the characters are purposefully overdrawn, Draper feels the most realistic, nagging you second and asking about your wellbeing the next. If Molly Gordon is Shiva Baby’s calming force, Draper is the realistically chaotic one steering the action forward.

As genius as Shiva Baby is, its hard to see its success going anywhere other than propelling a few careers and maybe becoming a cult classic. It’s release date and niche nature prevent it from exploding in popularity. However, as twenty-something Seligman’s cacophonously smart first feature, its hard to imagine Shiva Baby not being referenced in film textbooks, on multiple “underrated/hidden gem” film listicles, and as the source for Seligman’s, Sennott’s, and Gordon’s future success. How apropos that a film taking place at a shiva will birth new careers.

Shiva Baby is available in select theaters on through VOD. Watch the trailer below.