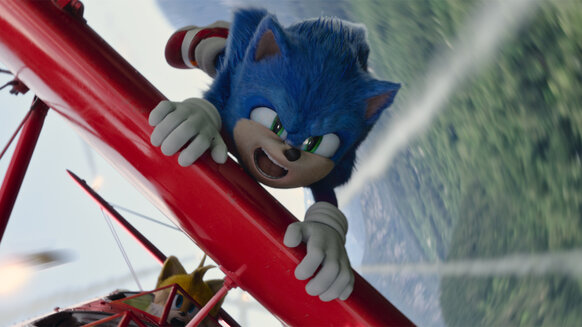 Paramount powerful 2022 continues, following the box office successes of Jackass Forever, Scream, and The Lost City. Sonic the Hedgehog 2 opened to a record breaking $71M, tops for a video game movie debut domestically. That’s greater than the $58M debut of the well-reviewed Sonic the Hedgehog in 2020 right at the start of the pandemic shutdown. The sequel was also given strong responses from critics and audiences, proving there’s a genuine love for the character (where are the raft of Sonic video games, SEGA???) and the creative direction. Worldwide, the total doubles with $141M.

Well, we predicted it would be a tough second week for Morbius. Sony/Marvel movie or not, the reaction to Jared Leto’s vampire hero has not been good. The film plummeted a whopping 74% for only $10.2M this week, and $126M worldwide.

Michael Bay’s action chase flick Ambulance backfired with just $8.7M. That’s the lowest EVER for a Bay film, even worse than critically-panned The Island‘s $12M back in 2005. I like that one quite a lot, actually. Anyway, despite the star power of Jake Gyllenhaal, Yahya Abdul-Mateen II, and Eiza Gonzalez, audiences chose the speedy blue hedgehog instead of the runaway ambulance. On the plus side, it only cost about $40M to produce and has totaled $31M worldwide which should make breaking even a cinch. Still, a Bay film is expected to be an instant blockbuster.

After three full weeks of slowly-expanding platform releases, A24’s multiversal action/family/comedy Everything Everywhere All At Once finally went national, and the wait was worth it. Building on the critical buzz and word of mouth, the Michelle Yeoh-led film blew up 461% and earned $6M. I wouldn’t be surprised if A24 runs this one back later in the year around awards season.