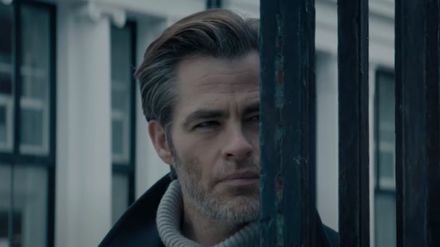 When I use to complain (::shakes fist at the clouds::) about the inconsistent charisma of Chris Pine, it’s exactly because of the situation before his fans right now. Just last week they saw him really ratchet up his presence in solid action flick, The Contractor, making the best use of his handsome features and physical gifts. And now there’s Prime Video’s ho-hum spy flick, All the Old Knives. Cool title, bro, but this knife’s edge is painfully dull and so is Pine, as he engages in one flat conversation after another with co-star Thandiwe Newton, herself also somehow diminished from the firebrand we’ve seen in Westworld and even Reminiscience.

Directed competently but passion-free by Janus Metz (of the excellent Borg/McEnroe), the film is essentially a game of cat and mouse between two spies and former lovers. It begins with the fictional hijacking of a Turkish flight by Chechen terrorists. The attack left everyone on board dead, a definite black eye to the CIA agents assigned to the case. They sit in shock and horror as the events unfold; Celia (Newton) race out of the room in anguish, while her then-lover Henry (Pine) chases after her.  Eight years later, new information surfaces that someone on the inside may have aided the extremists. Henry, as the only one who worked the case that is still around, is tasked with getting to the truth.

For an international spy thriller, All the Old Knives doesn’t bound around the globe like most others do. Nor is it an action flick in the vein of Mission: Impossible or James Bond. It fits neatly into the John Le Carre mold, which under most circumstances I would be down for. There’s nothing like a good game of spy vs. spy in which every word must be scrutinized, every action considered and reconsidered in light of new information. Modern adaptations of Le Carre, the best ones anyway, are so good at adding contemporary themes and real-world context. There’s none of that here. What we got are a handful of people chatting across from dinner tables.

To be fair, there’s nothing wrong with the static nature of All the Old Knives. A lot of hay can be made by having two espionage pros dueling verbally until someone’s armor is pierced. But the sparring between Henry and Celia, who reconnect after she’s long since left the Agency and is married with kids, has zero heat behind it. The conversation, set at a posh but empty restaurant, begins with the kind of awkward jabbing of reunited old friends who aren’t sure they’re still friends. Eventually, Henry gets down to business which is to discover if Celia is the traitor. This whole thing only works if Henry and Celia have some kind of spark. They don’t. Pine barely registers above a blip on the emotional radar he’s so reserved, while Newton isn’t much better. I also didn’t really buy her as a former spy. She’s too expressive, compared to the low-key Pine and, in different contexts, co-stars Jonathan Pryce and Laurence Fishburne.

I spent most of my time wondering what the movie’s point was. It seemed to be saying something about the nature of surveillance, and how it destroys both sides of the equation. It’s a sentiment we’ve seen expressed in much better films, such as The Lives of Others. There’s an attempt to be committed to that theme, in one of Henry’s former snitches who has since become an extremist himself, but Olen Steinhauer’s screenplay, itself based on his upcoming novel, is more focused on Henry and Celia’s interactions.

As forgettable as much of the story has been up to the final act, things pick up once everyone’s cards are on the table and it becomes clear that someone is going to have to get lethal. All the Old Knives plays into this tension between ex-lovers quite well, with Pine and Newton finding better chemistry as danger mounts. It’s a shame this couldn’t have had more fire behind it. There’s been a real lack of quality spy flicks for adults and this one had the potential to be as sharp as its title suggests.

All the Old Knives is streaming on Prime Video now.