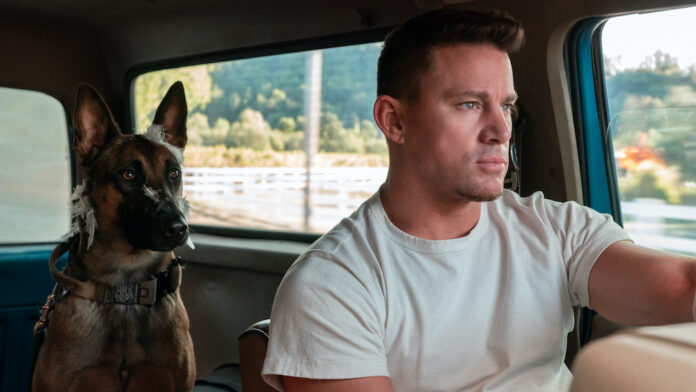 Fallen soldiers and loyal canines. Channing Tatum sure makes it tough to dislike his directorial debut, Dog, a man & pooch dramedy that probably has you thinking it’s something it’s not. For one thing, it’s not Turner & Hooch, not by a long shot. This film, which Tatum stars in and co-directed with his producing partner Reid Carolin, goes on some seriously strange diversions. And the cute and cuddly scenes you’re expecting to see arrive with a darker edge than seen in the promos. That said, it’s also earnestly sweet and rewarding, providing a charmer of a role for one four-legged sidekick and Tatum, his first lead role in years.

Tatum plays Briggs, an Army Ranger out of rotation due to having too many brain injuries. Briggs is struggling to acclimate back home, working a shit job for shit pay; his only goal to get back out in the field. That’s looking unlikely, though, until his former captain offers him a lifeline. One of Briggs’ military pals has died in an accident, and his combat dog Lulu needs to be driven the 1500 miles, from Washington state to Arizona, to be guest of honor at the funeral.

As you probably figured, Lulu is just as broken as Briggs. Heaven forbid you touch the dog’s ears; it’s one of her “combat triggers.”  Briggs isn’t doing so good, either; his body is covered in scars, he wakes up with panic attacks, with pills and alcohol his only means of coping. So this trip should be good for them both, but of course it can’t start that way. You will be unsurprised to know that Briggs’ truck gets chewed up in the journey, that the big guy eventually warms to the pooch and the pooch to him, and that there will come a moment when both are in need of the other just to survive. And of course, there’s zero chance they’re missing that destination.

Carolin’s script is definitely formulaic in most respects; the comic bits are right out of K-9 or any one of a million man’s best friend comedies. There’s something comforting about that, though, and for seeing Tatum in this kind of role.  Other tough guy action stars have seen their cold exteriors melted by a dog, but Tatum has a leg up on them because we already see him as down-to-earth and relatable. That’s why it’s so surprising the aspects of Dog that aren’t formulaic; such as Briggs pretending to be blind so he and Lulu can get a free room at a swanky hotel. Okay, that might sound like disposable broad comedy, but that’s until Lulu breaks free and attacks a guy who looks a Middle Eastern terrorist. “He’s just doing what he was trained to do!”, Briggs shouts after being arrested for the assault, which is disturbingly true in a way he doesn’t understand. Or how about when Lulu runs away and is found by a pot smoking hippie couple (Kevin Nash, Jane Adams, both great) who first tranq Briggs, only for him to wake up and nearly murder them with an axe? In another, the painfully irresponsible Briggs leaves Lulu unattended (which he does multiple times) while he horndogs it in a Portland bar, picking up two cartoonishly feminist women (Emmy Raver-Lampman and Nicole LaLiberte, both deserving better), and attempts to convince them to have a three-way. It’s a scene that appears to be mocking Briggs’ toxic military masculinity, but elsewhere the film embraces that side of him, so it’s unclear what the overall message is supposed to be. Other weirdness has The New World‘s Q’orianka Kilcher pop up in a silent role as one of Briggs’ exes, and Bill Burr as a racist cop and military vet with an inferiority complex.

Movies like Dog are safe and emotionally manipulative, but they also work very well. Tatum is genuinely good at capturing Briggs’ desperation to cling to the thing he knows best, and his disregard for everything else. As Briggs’ attitude thaws, we believe in the friendship he builds with his canine companion, so much so that the heart-tugging beats at the end truly feel earned. Get ready to turn on the waterworks! Also fantastic in a surprisingly meaty role is Ethan Suplee as a fellow Ranger intimately aware of what it will take for Briggs and Lulu to get through the darkness. Maybe it’s me, but every time I see Suplee and the physical changes he’s gone through, I’m stunned. He’s also become just a much better actor over the years, too.

Dog is unusually scattered for a film that is ultimately treading in comfortable territory. Even the Thomas Newman score is pretty safe. While it goes to some unusual places, the film always finds a way back to what Hollywood knows will always work: guys and their dogs.