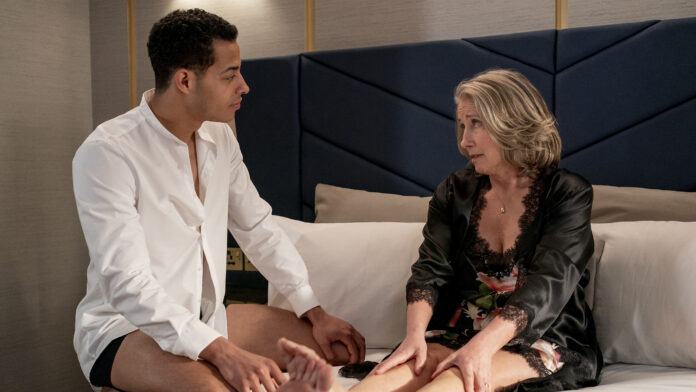 Somewhere in Britain, two strangers meet in a hotel room. One is a 55-year-old widow and former high school religious studies teacher named Nancy. The other is a millennial sex worker who loves his job. Over the course of its breezy 97-minute runtime, Sophie Hyde’s Good Luck to You, Leo Grande examines sex-positivity in a crowd-pleasing comedy.

Written by Katy Brand and part of the 2022 Sundance Premiere category, the entire film takes place in a single hotel room over four separate meetings between Nancy (Emma Thompson) and Leo Grande (Daryl McCormack). As the saying goes, sex work is work and Leo has his work cut out for him in Nancy. Nervous and yet concerned about his well-being, the retiree spends most of their first session with her foot metaphorically in her mouth. She recognizes that she needs physical intimacy after a passionless marriage but can’t get over the stigma of sex work. Consumed by her own insecurity about her age and body, she talks herself in and out of a sexual encounter with Leo – to his face.

Playing opposite Thompson is Daryl McCormack in a star-making performance. It is no easy feat to go head to head with an actor of Thompson’s caliber and experience but the 29-year-old Irishman easily keeps up. McCormack exudes charm and joie de vivre. You are immediately on his side. His confident non-judgemental nature put not only Nancy at ease but the audience. He readily handles his client’s stigma and reservations about their encounters. As a sex worker, Leo isn’t victimized or galvanized. Instead, we see someone good at what they do even if society condemns them for it.

It’s Thompson, though, who gives a career-defining performance. Proving she really is one of the best working actresses out there, her Nancy slowly evolves from sexually repressed to confident. Vulnerable and at times both heartbreaking and frustrating, Thompson brings a universal relatability to the character.

The chemistry between Thompson and McCormack is electric. Brand’s dialogue seamlessly bounces between the two as they explore more than just sex. Conversations become deep and philosophical as they talk about their pasts and current (and often contradictory) worldviews. It’s like if My Dinner with Andre took place in a hotel room.

Hyde smartly shows the ordinary side of sex work and the unseen sexuality of women over 50 to explore the generational divide between a sex-positive millennial and a sexually reserved older woman. Yes, we see more of Thompson than we ever have seen before but with Hyde’s direction, the choice feels natural and empowering.

It would be inaccurate to call Nancy and Leo’s relationship a romance, Good Luck to You, Leo Grande is one of many recent projects featuring the coupling of an older woman with a younger man. Succession, Ted Lasso, and The French Dispatch all depict the complex sex lives of women pushing 50 and beyond. While it’s refreshing to see these narratives in the Hollywood diaspora, this trend by no means indicates the industry is over its ageist and sexist beauty ideals. But in the meantime, settle in, make yourself comfortable, and enjoy the ride that is Good Luck to You Leo Grande.