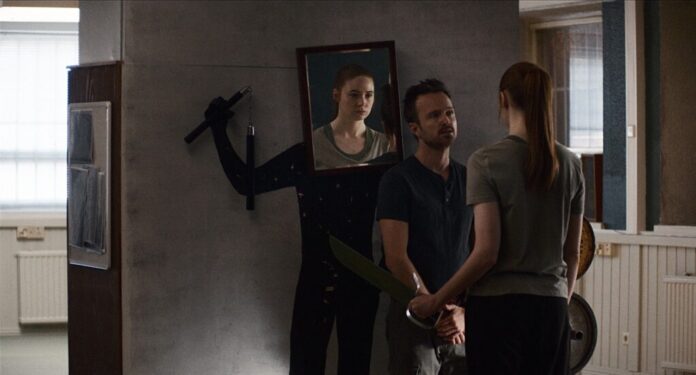 It would almost be funny if it weren’t so devastingtly depicted by The Art of Self-Defense director Riley Stearns. In Dual, Karen Gillan plays Sarah, a woman who learns she is dying of a rare, terminal illness. Sarah agrees, albeit reluctantly at first, to undergo a cloning procedure that will create a “replacement” for her when she’s dead. This clone will look like her, and live with Sarah until her death so as to be able to properly be her as closely as possible. But after nearly a year of watching this alternate version insinuate herself into her life, Sarah learns she isn’t going to die after all. So now what’s a girl to do?

This could almost be a comedy sketch. I feel like that’s how Riley Stearns works. His films could almost be a comedy sketch, except there’s always something dark and just off about them. While there could be some wacky twin Sarah hijinks, Dual mostly darkens all of that by introducing a caveat to the cloning procedure. There can only be one that exists. Period. And if the replacement refuses to be terminated, then it must duel the original to the death.

Stearns once again explores the life of a person who, well, doesn’t have much life to speak of. Sarah has a cold, somewhat distant relationship with her boyfriend (Beulah Koale), who is often away at work, leaving her alone to wallow in her despair. Her mother is in constant need of attention, something Sarah doesn’t want to give. She has no job prospects worth discussing, and life generally sucks. So what the Hell is she going to fight for? Does she even really want to?

Unlike his previous film and its exploration of toxic masculinity, Dual turns its attention to a woman finding a reason to kill for her life. This is made more difficult by the replacement, who looks much younger and more beautiful, getting everything she wants with relative ease, including Sarah’s boyfriend and the appreciation of her mother. Sarah is forced to look inward at the choices she’s made and to come to grips with her identity. How difficult is it to be the best verson of oneself when the best version exists and has taken everything you hold dear?

Guardians of the Galaxy fans will be interested to know there’s some similarity to the performance Gillan gives as the robotic sibling, Nebula. Sarah speaks in blunt, matter-of-fact terms, with all of the emotion of a robot. When she’s given her deadly diagnosis, Sarah doesn’t even weep. There’s even some similarity in the sibling-like relationship between Sarah and her double, with the younger version resenting her older, wiser, but less impressive opposite.

Stearns once again uses violence to offbeat effect with the introduction of Aaron Paul as Trent, Sarah’s personal trainer. The coming battle with her replacement has lit a spark under the out-of-shape redhead to start busting her ass. Paul plays the role with the earnest seriousness of a LARPer, or an extra on Cobra Kai. This guy is probably deadly, but also possibly delusional. His training regiment is absurd, but it means a lot to him and Sarah needs to win. Their sensei/student relationship borders on friendship and enlivens a inscrutable narrative style.

The twin lives of Sarah and her opponent, eventually named Sarah’s Double, keeps Dual coasting along smoothly. Sarah’s life is fascinating, but also is the ease which Sarah’s Double takes over. But the grass isn’t always greener, and we see Sarah’s Double slipping into some of the same malaise that her original experienced, which begs the question whether this is just something inherently wrong with her?

Where Dual goes off track is in the final act, as the fight actually approaches. Stearn should’ve let it play out, but is too clever by half. Instead, the two Sarahs talk and come up with a different plan that could save them both. We learn a little bit more about how society deals with the replacement process, including self-help groups, but that just opens up questions the film isn’t willing to answer. The unsatisfying finale introduces a twist that is quickly telegraphed and undercuts what had been a rich, even thrilling look at what one chooses to do with their life, especially when another threatens to take it away.