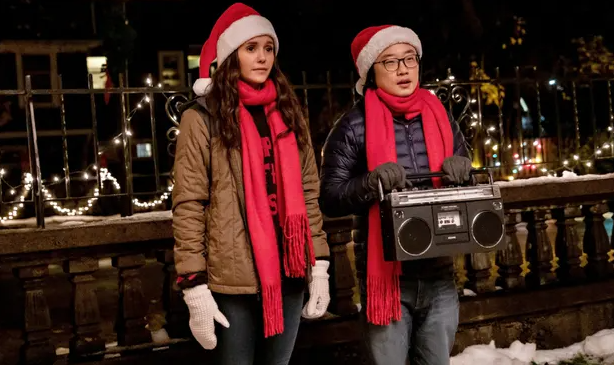 It’s only the beginning of November and Christmas, along with her plethora of Rom Com movies, are bursting through the “Let’s Skip Thanksgiving” holiday door. The Hallmark channel has already replaced my go-to late night and old school murder mystery shows with their 24 hour run of holiday films over the next few weeks. Humbug! All Grinch-ness aside, Holiday RomComs are not that bad but only a small batch are stand out worthy and an even smaller batch that I’d actually watch during the season. If it’s not already obvious, this particular genre of films are not my first, second, or even third pick regardless of the time of year. However, when it comes to reviewing them, I remain open to the idea that I may actually be inspired by something out of my own comfort/norm. Netflix has done just that with a “catfishing gone wild” Christmas love story that triggers all the right feels and warms the soul with Love Hard.

Love Hard is directed by Costa Rican actor/writer Hernán Jiménez  (Elsewhere, About Us) and written by Danny Mackey and Rebecca Ewing. Natalie (Nina Dobrev, Degrassi: The Next Generation, The Vampire Diaries) is an eternally single LA journalist who’s a hopeless romantic with a track record of horrible dates. Despite not being able to find love, she does successfully write a popular dating column for all her dates that go horribly wrong. Things begin to look up when her dating app chimes a match and she swipes right to whom she thinks may actually be her Mr. Right. Tag (Darren Barnet, Never Have I Ever) is a dreamy East Coast, outdoorsy kind of guy and Natalie is instantly hooked. They spend weeks on the phone getting to know each other and it’s clear both are smitten. With Christmas right around the corner, Tag wishfully invites Natalie to his Lake Placid home in New York to spend the holidays with him and his family. Taking a leap of faith, she hops onto the next flight to surprise her crush and upon her arrival, she finds that “Tag” is not who he says he is.

Natalie discovers that Tag is actually Josh (Jimmy O. Yang, Silicon Valley, Crazy Rich Asians). Josh is meek, timid, lives in his parents basement and happens to be an old childhood friend of Tag; the dreamy guy who’s identity Josh stole to catfish Natalie. The film turns up the hilarity when Josh and Natalie strike a deal for Josh to set Natalie up with Tag and in return she pretends to be his girlfriend until Christmas with his family is over. Josh helps Natalie be the girl that Tag wants her to be while Natalie helps Josh come out of his own reserved shell and from under the thumb of his attention seeking brother Owen (Harry Shum Jr., Shadow Hunters, Crazy Rich Asians). Natalie and Josh may be unlucky in love and end up in crazy and new-age fun situations (with fantastic chemistry) in order to keep their deal in check. This lighthearted holiday movie does successfully chronicle their attempt to reel in love while metaphorically dodging ice covered snowballs which admittedly, is realistically relatable when establishing and sustaining new and old relationships…especially during the holidays. Love Hard is a title mashup, RomCom film that comedically ends on a fun note that Die Hard and Love Actually fans could respectfully appreciate. Worthy of a watch and that’s a good thing coming from me.

Love Hard is out on Netflix now. Check it out.  www.netflix.com/lovehard

‘Everything Everywhere All At Once’ Trailer: Michelle Yeoh Stars In New Sci-Fi From ‘Swiss Army Man’ Duo