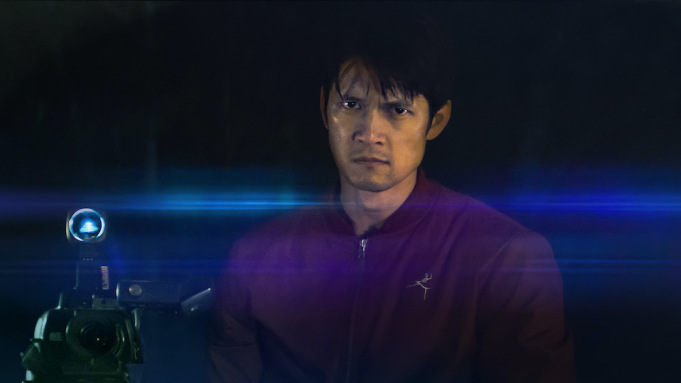 One of the many mysterious, shadowy figures that populate the paranoia-fueled Broadcast Signal Intrusion paraphrases that statement and has no idea how right she is. Jacob Gentry’s The Ring-meets-The Vast of Night puzzler piles one mystery after another, from a mysterious television signal to the disappearance of women in the 1980s. Despite a game performance from Harry Shum Jr., the stakes remain frustratingly low and the answer to the riddle unsatisfying.

Set in 1999 when AV technology was in a transitional phase, the film centers on James (Shum), a depressed loner who has found the perfect job cataloging old TV broadcasts during the overnight shift. Still recovering from the disappearance of his wife Hannah three years earlier, James finds little that sparks his interest other than fixing old cameras. That is until an old broadcast he’s watching is interrupted by another signal featuring a strangely-masked woman. Somehow obsessed with finding out the truth of these intrusions, James uncovers a web of secrets and lies involving multiple interruptions since 1987, and they could be tied to the disappearances of many different women, possibly even his Hannah.

Broadcast Signal Intrusion is one of those murky, confounding films that asks you to accept that the filmmakers know where they’re going, despite evidence to the contrary. We’re meant to believe the “creepiest unsolved mystery hack of all time” has driven scores of people nuts. But we’re never given any reason why going “down the rabbit hole” has such an effect on those who view this particular broadcast. Is it something supernatural? Or something more mundane? The answer is disappointing, as it could only be when the mystery is left so vague there’s nothing to connect with. Shum is convincing James, who fills the empty void in his life with a desperate grab at hope, but it’s not enough to make this a signal worth tuning in to.

‘Everything Everywhere All At Once’ Trailer: Michelle Yeoh Stars In New Sci-Fi From ‘Swiss Army Man’ Duo