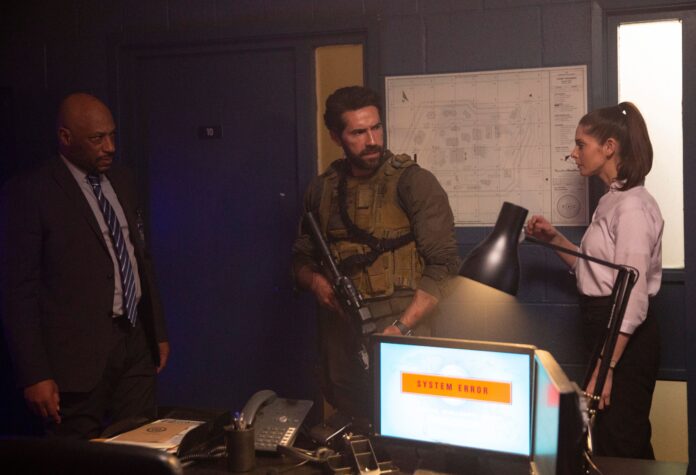 In some unknown island there lies a CIA black site prison housing some of the world’s most dangerous terrorists. This island is the setting for Lt. Blake Harris’s (Scott Adkins) next mission in One Shot. Harris, and his squad of Navy SEALs, is tasked with picking up a prisoner and bringing them back to DC. There has been a threat of a terrorist attack at the State of the Union. CIA intelligence believes Mansur (Waleed Elgadi) has knowledge of the attack and may be able to help prevent it. Harris is escorting Zoe Anderson (Ashley Green), a CIA analyst, to pick up Mansur and get him safely back stateside.

As if that wasn’t difficult enough, even more obstacles rear their ugly heads. From the jump Jack Yorke (Ryan Phillippe), the chief officer of the prison, becomes a big roadblock. He is incredibly uncooperative and feels that his team can extract any information the CIA needs from Mansur. Yorke’s right hand man Tom Shields (Terence Maynard) echoes his sentiments, only making things more difficult for Harris & co. To make matters worse, Mansur is quite the wanted man. Hakim Charef (Jess Liaudin), a terrorist group leader, invades the prison with his men in an attempt to silence Mansur. As Mansur continues to proclaim his innocence – Harris and Yorke must put aside their differences to survive. 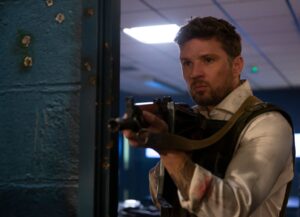 One Shot is directed by James Nunn who came up with the story that Jamie Russell based the script on. One Shot is the third collaboration between Nunn and Adkins. Nunn first directed Adkins in 2013’s Green Street 3: Never Back Down and again 3 years later in Eliminators. The title, One Shot, is a double entendre. The title refers to the one shot the Navy SEALs have to stop the terrorist’s plot. One Shot also refers to Nunn filming the movie in one take, similar to the award winning 1917. Nunn and Adkins discussed creating an action movie filmed in one seamless take during the filming of Eliminators. Now, years later, it has finally come to fruition.

Filming a movie in one shot is an extraordinary feat, and one that should be lauded. This structure allows the audience to truly feel engulfed in the film – as if we are there with the SEALs team. Everything they experience in real time over the run length, we experience as well. This adds a level of realism to One Shot and no wondering how someone is able to magically get from one place to another in the blink of an eye. 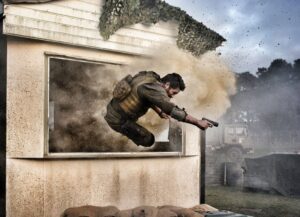 The action in One Shot is enjoyable throughout. There are enough different weapons and fighting styles to satisfy most action tastes. Adkins is a master of his craft and that is in no short supply. The biggest issues are a sense of repetitiveness and not feeling connected to the characters. The character’s motivations are briefly glossed over and quickly forgotten. There’s a lot of people shouting in a room, break for a gun fight, back to shouting. Visuals and close combat ratchet up the film’s intensity while the script leaves a lot to be desired. There are multiple cheesy moments, but the action sequences try and make up for them. When the dust settles, One Shot, is a middle of the pack action film. The filming style adds some uniqueness, but the script and eye rolling moments take away. It is worth a rainy-day watch though.