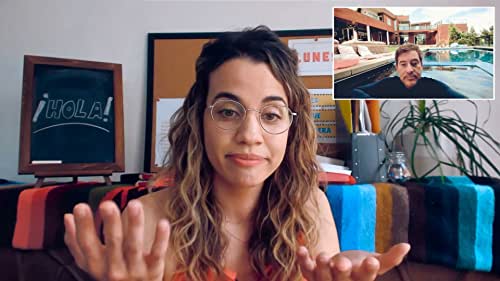 In the age of COVID, some pandemic movies are better than others. A production has to adjust for new regulations and make creative decisions that could impact storytelling negatively. Many directors have resorted to zoom and video meeting platforms to make movies. Some films turned out stale and gimmicky. Language Lessons is fresh.

Written by Mark Duplass and Natalie Morales, with the latter directing, the film’s concept is rather simple. Morales plays a Spanish tutor living in Costa Rica who was hired by Will (Desean Terry) to teach 100 Spanish lessons to his husband, Adam (Mark Duplass). The surprise leads to confusion. Soon Morales’ Cariño must figure out how to teach someone Spanish who knows the language pretty well. Adam wants to regain the fluency he lost as a child.

As the two talk, they fall into a friendship that is tested after their second lesson: Will has died. This is where Duplass and Morales’ writing and timing combine to create some of the most relatable cinematic moments we’ve seen during the pandemic. Adam’s grief, anger, and isolation are reflected in each session the two have, mirroring our own complicated emotions that permeated during the lockdown.

The film includes the classic technological mishaps many of us encountered over the last 18 months. Audio occasionally cuts out, screens freeze, wifi lags, and people awkwardly talk over one another with long pauses following after. It also captures the unfulfilling feeling we get from not being able to be in someone’s presence after a long period of time. Talking with them and seeing their face scratches the itch but it’s not the same. Keep in mind the film never introduces COVID or the pandemic into the story – just the emotion we are all feeling.

Mark Duplass is charming as Adam and handles more emotional baggage with this role than his more recent endeavors. Watching him struggle to put on a stable face for Cariño is a rollercoaster ride in empathy.

Morales is just as great as captures the moral dilemma she faces as his teacher thousands of miles away. As his superior, she must set and keep boundaries which is hard when someone is completely falling apart in front of you. Morales never takes the easy way and portrays her character as his saving grace but as a flawed individual struggling to help another flawed individual.

As a director, Morales makes all the right moves except one. She grounds Language Lessons in reality and real emotion which makes the film so effective.  However, the film’s use of music detracts from its realism. If you are watching a film that takes place over Zoom, you don’t want to be taken out of it by a song that doesn’t play in the story. The technique feels completely out of leftfield.

If last summer’s Palm Springs reminded us that nothing really matters as long as you have someone to share it with, Language Lessons is this Summer’s final film. It reminds us that human connection isn’t perfect or straightforward, but it is worth it.

Language Lessons is playing in select theaters. Watch the trailer below.