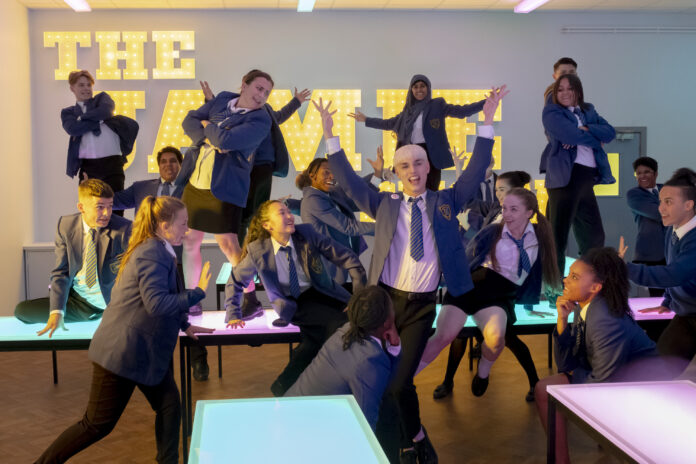 Everybody’s Talking About Jamie started out as a hit musical on the West End. The show premiered in the UK in 2017 and was nominated for five Laurence Olivier Awards in 2018. The whole production was inspired by a 2011 television documentary about a teenage boy who wanted to become a drag queen.

This week marks the long-awaited release of the musical’s film adaptation directed by it’s stage director Jonathan Butterell and written by Tom MacRae. Though pushed by the coronavirus pandemic, the film is a burst of joy despite a few hiccups

Starring as the out and proud 16-year-old Jamie New is Max Harwood. Though he doesn’t try to hide his sexuality, Jamie is currently wrestling with where exactly he fits in with in that identity. He lives with his very supportive and hardworking mother Margaret (Happy Valley’s Sarah Lancashire), though he pines for his homophobic father who abandoned his family a few years before.

Supporting his every move is Pritti (Lauren Patel), one of the few Muslim kids in their Sheffield school. It’s with the support of the people around him that Jamie starts to pursue his dream of being a drag queen, with the ultimate goal of going to prom in full drag.

Along the way, he meets Hugo, a local dress shop owner who used to be a famous queen named Loco Chanelle. With his newfound confidence, Jamie must encounter bullies and the realization that he can’t take up all the attention in the room.

Most American audiences will not be familiar with the West End production. This may be a good thing as many of the songs in the film’s first two-thirds are triumphant bangers. The film’s opening number “Don’t Even Know It” pulls you in, gets you snapping and the lyrics stuck in your head. Harwood’s charisma oozes out of the screen through every high note and kick.

Pritti doesn’t get much of her own storyline beyond helping Jamie discover his. However in her song “Spotlight,” she encourages Jamie to go to prom in drag. Butterell turns the school cafeteria into a dancehall complete with doo-wop lunch ladies. It’s easy to tell that Butterell uses a lot of the same blocking and choreography of his stage show. This works really well, allowing us to delve deeper into Jamie’s fantasies. He brings the same appeal that made the stage show work to the screen… for the most part.

With the bar set so high in the first two thirds, the latter part does drag. Many of the more emotional songs completely stop the film’s momentum and get tedious after a while. This is musical about a gay kid learning about himself and his identity so the ending gets sent

The always amazing Richard E. Grant plays the father figure/mentor brilliantly. Fresh off of his appearence in Loki, Grant makes Hugo/Loco feel lived in and fun. However the film greatly underuses him in its latter half. Playing a teacher is Sharon Horgan whose characterization feels uneven. Adeel Akhtar (The Big Sick, Enola Holmes) appears as the school principal and is again underused.

In a world where RuPaul’s Drag Race is the norm, Everybody’s Talking About Jamie doesn’t feel as groundbreaking or profound as you want it to. But Harwood is so charming as the lead, Grant is so fun to watch, and the most of the musical numbers are so well done, its worth the watch.

Everybody’s Talking About Jamie is playing in select theaters including AFI Silver. It is available on Amazon Prime Sept. 17th. Watch the trailer below.