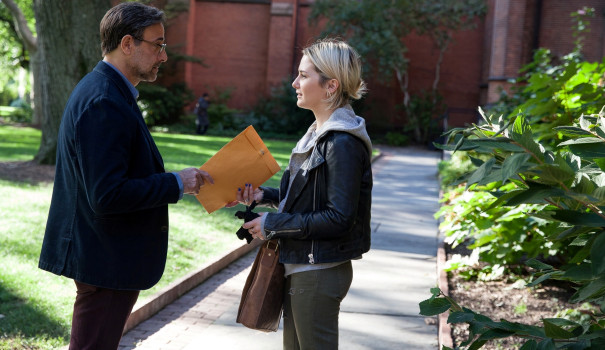 Submission debuted a year ago at the Los Angeles Film Festival, and if it had opened then we probably wouldn’t have heard a word about it or cared that much. But to arrive now, after months that have brought us #MeToo, #TimesUp, and too many Harvey Weinstein-types to count, Submission‘s play on sexual power between a male professor and his talented, beautiful student/protégé couldn’t come at a worse time.  With added eyes on the film, viewers will most likely overlook the strong performances by stars Stanley Tucci and Addison Timlin and instead focus on the wasted opportunity to say something important about this moment in our time.

That, and there are an entire library’s worth of clichés to deal with. Tucci, sporting a rare head full of hair, plays Ted Swenson, that most frequent of cinematic creatures; the white, middle-aged author with one moderately successful novel, now a bored college professor struggling with his second book. >yawn<  Ted has a lovely, loyal wife (Kyra Sedgewick) and a comfortable life, but of course it isn’t enough. He’s bored, frustrated, and needs to feel special again. Perfect timing that he comes across Angela Argo (Timlin), one of his writing students who shows legitimate promise to be a real writer. Or maybe he only feels that way because she praises him constantly. She’s a fan of his book…y’know, that one book he wrote, and wants desperately for his opinion on her work. Ted is only too happy to oblige because she stroked his ego. Angela keeps stringing the mouse along with new chapters from her book, which just so happens to be about a student in a passionate affair with her teacher. Hey, whaddaya know? What a coinkydink!

Seriously, are there men out there as dumb as Ted? Or do they exist only in Hollywood movies? Michael Douglas used to play guys this dumb all the time back in the ’80s and ’90s (Disclosure was a personal favorite). But all these years later it’s dispiriting to see the same idiot intellectuals falling into traps of their own design. There’s never a moment that we see anything other than a schemer in Angela, and never a moment when Ted doesn’t look like a blind moron who is about to step on the wrong end of a rake.

Writer/director Richard Levine adapted Francine Prose’s novel, Blue Angel, which was something of a firestarter back in the day. Now it reads as rote and overfamiliar, perhaps because it has been adapted so many times by others. His film relies on numerous tropes but the most problematic one for the time we live in is that of the young, man-eating vixen ensnaring innocent men and destroying their lives. While Angela is no saint, Ted doesn’t have a halo over his head, either. Forgetting the inevitable, disgusting infidelity (which Levine shoots as grotesquely as possible to maximum effect), he’s also a leech who sees Angela’s success as his own, literally co-opting her work to cover for his failures. At this point. Submission is still a conversation-worthy piece with tremendous work by Tucci and Timlin. We expect that from Tucci, but Timlin has been on a career high and I’m afraid not enough people are noticing it. Here she strikes an alluring balance between Angela’s innocence and deviousness. You want Ted to help her one minute but you’re screaming for him to get away from her the next.

Submission‘s final act throws what little nuance there was out the window completely and concocts a nightmare scenario that turns Angela into a monster and Ted as the naïve deer in headlights. Those are the least interesting ways to portray either character, and feel like a way to avoid a more realistic outcome to a problem that couldn’t be more timely. It’s a shame because doubtful there will be many more films with this cast that will be willing to say anything at all.