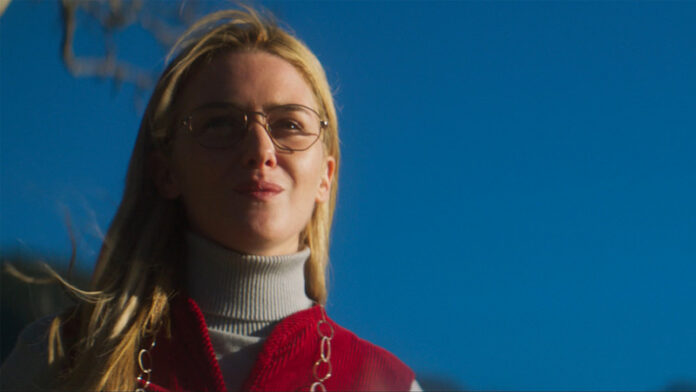 Trailers come along so often that you sometimes get numb to them. But every now and then one pops up that is just so…weird, promoting a film that you don’t understand how it possibly exists, much less who it could ever appeal to. That’s the way I feel about When I’m a Moth, a Hillary Clinton “un-biopic” that reimagines the year she spent in Alaska in 1969.

Why would anybody want to reimagine such a thing? Well, I was confused about it, too, and then the viewpoint of filmmakers Zachary Cotler and Magdalena Zyzak (the duo directed border drama The Wall of Mexico) comes through. The film is a dark satire, borderline Election-esque, and has Clinton claiming herself to be a radical Marxist (She’s definitely not!) while engaging in a sexual relationship with a Japanese man. She’s also oddly guarded about herself, refusing to even give her last name.

The trailer begins with this odd declaration: “What follows is a work of fiction. So is the United States political system. Any resemblance, in either fiction, to real persons, living or dead, is coincidental.”

Addison Timlin, who I’m always going to be a fan of, plays a young Hillary Rodham, joined by co-stars TJ Kayama and Toshiji Takeshima.

When I’m a Moth played in festivals back in 2019 without generating much positive buzz. The film will hit VOD on August 27th.

A parable on the ambiguity of political narratives. Possibly an “un-biopic” of Hillary Rodham (Addison Timlin) set in 1969 Alaska. Possibly a collective dream about a young woman with only the most abstract connection to the politician. Possibly both.

Review: ‘Feast Of The Seven Fishes’, A Christmas Dinner You Don’t Want To Miss

Review: “Like Me” Is A Fascinating Visual Thriller About The Perils Of Internet Culture