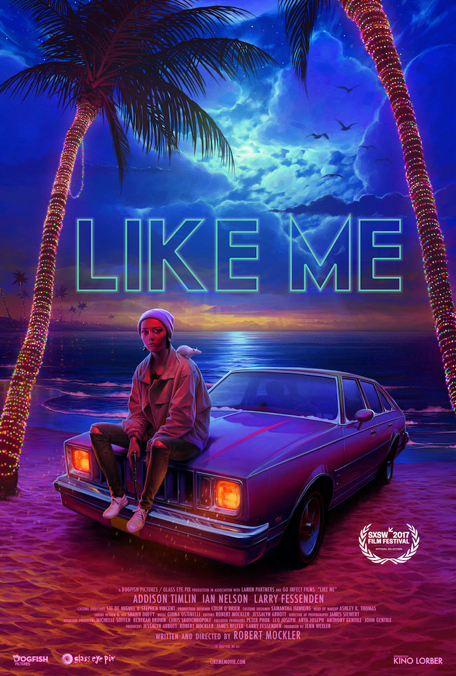 In this day and age of a movie industry that is more focused on ROI and creating franchises more than they are worried about creating something with artistic quality that is meaningful and worthwhile, the thriller Like Me; written, directed, and edited by Robert Mockler; starring Addison Timlin, Ian Nelson, and Larry Fessenden; is a breath of fresh air to say the least. Watching this movie is akin to an outer body experience; it’s like nothing you’ve ever seen before and for that reason alone I think that everyone should give this movie a watch if the opportunity ever presents itself.

This is one of those movies where one simple viewing does not suffice. Your first viewing is so much of a mindfuck that I guarantee that most of your time will be spent on trying to understand what it is that you’re taking in and I don’t mean that in a negative way at all. It’s that kind of positive confusion that’s due to the abrasive, sometimes disturbing, and even uncomfortable images matched with the overall absurdity of the situation at hand that draws people in and keeps them engaged to the very end. However, don’t get me wrong, this movie still requires that kind of active participatory viewing on the part of the viewer because there are those scenes that are not heavily reliant on the “What am I watching right now?” kind of reaction.

Once you get past the overall shock of it all and do ultimately decide to give the film that much needed 2nd watch that is when you are able to then get into the story and its reason for creation. This movie is a social commentary on the perils of isolation that has been caused by this new, millennial, internet culture.

The main character is a 17 year old named Kiya (Timlin), whose mission it is to go out of her way to commit these heinous and outlandish acts, risking her own freedom and life in the process, all in the name of internet fame; this film truly exemplifies the idea that “any publicity, is good publicity.” However, one of the things that we are meant to understand is that through this search for notoriety from people that you don’t personally know it in turn, creates this immense sense of isolation and emptiness because that striving for that sense of connection is, at its core, based on these false pretenses that if you have people that are giving you attention, it can then fill that void of loneliness, when in reality it can’t.

In my attempt at trying to find out more about the man behind one of the films that I know will continue to have an impact on me for years to come, I was surprised to find that this was Robert Mockler’s first film. Visually, this movie was everything for me. I love coming across filmmakers that remember that film, at its core, is a visual medium and then attempt to experiment with it in a way that I’ve never seen before. I also wanted to quickly add in that Mockler’s use of color is amazing. I’m someone that pays quite a bit of attention to the use of color in film and his choices filled my heart with immense amounts of joy.

Getting into the actual meat of the plot I know that it’s something that I’ll have to watch and sit with quite a few more times to be able to really unpack everything that I know is there. Any film that requires that kind of activity on my part is something that I can appreciate, truly.

Robert Mockler, if you ever get the chance to read this, I just wanted to personally thank you for creating a piece of art that has reminded me why it is that I love film and why it is that I know that I have chosen the right passion to pursue. This movie was incredible and it’s something that everyone should put on their “must watch” list.