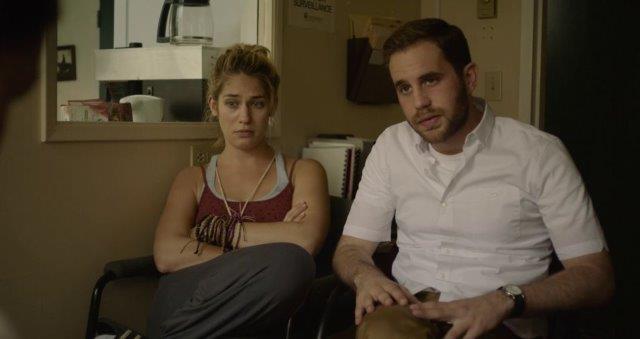 “Your sister didn’t ruin your life, her illness did.”

Often when dealing with mental illness in film, it’s historically been used for comedy purposes in movies. But nowadays, as a culture we have evolved, we’ve gotten “woke,” and so does our storytelling. Plenty of films these days showcase the complexity involved with different types of mental illnesses, and Broken Diamonds is a great example of said type of film.

Scott (Ben Platt) is a twenty-something aspiring writer, who’s currently working at a restaurant with one of his few friends (Alphonso McAuley) and not necessarily happy with his 9-5 and wants to finally take the plunge and become a writer for real. He quit his job and has decided that he will take his talents to Paris to try being a writer full time.

Unfortunately for him, shortly before it’s time to head on out to Paris, he is informed by his father’s second wife Cookie (Yvette Nicole Brown) that his father has died. While it seemed as if it’s expected and he’s not necessarily that surprised or sad, he is advised by attorneys reading his father’s will that his sister Cindy (Lola Kirke) is also a recipient of their father’s estate. And if he wants to sell his father’s house (which he does), he will need his sister to also sign off for the sale of the house. Oh, and Cindy is schizophrenic.

As soon as he goes to pick up his sister from her treatment center and inform her that their father died and they are selling the house, he’s hit with more news, her behavior has gotten her kicked out of her current treatment center and Cindy has to stay with him for the next two weeks until she can be moved into another place.

This doesn’t bode well for Scott as he’s trying to get all his things in order for his move to Paris. It’s clear he’s not equipped to deal with Cindy. She burns his passport after setting the house on fire. She damages his car he’s trying to sell before his move. He does try and work with her, but dealing with someone with a mental illness is no walk in the part, no matter if you grew up with them or not. He takes her out for ice cream. He tries to get her his old job, but unfortunately, it proves to be very taxing for him. And this is all before she decides to stop taking her medication! As things continue (and her mental status deteriorates), Scott has to try and hold things together for himself. It’s clear he’s been not only dealing with issues related to his sister his whole life, but he’s now reckoning with how trying to placate her illness has impacted his own issues with life as well and there’s a lot he needs to unpack. Not only does he have deep-seated issues with his sister, but also with his father and his mother who always had to put his needs on the back-burner to help his sister Cindy.

Some aspects of Broken Diamonds did not work so well. While Yvette Nicole Brown is a national treasure at this point, her character Cookie is reduced so far to the background that you really don’t get to see her do much except provide support to Scott in yet another example of a “magical Negro.” It would have been more interesting if we got to see her a little more throughout the film. There are voiceless flashbacks that are meant to display the chaos of Scott growing up with a mentally ill sister, negligent mother, and angry father meant to help us feel sympathetic for him, but because the scenes are soundless, they don’t work as well as director Peter Sattler probably intended to. It tries to make him sympathetic, but instead makes you hate him a little bit for being so resentful to his sister.

That said, the performances in Broken Diamonds are great! Ben Platt was very good in Netflix’s The Politician, and continues to shine in Broken Diamonds. Scott starts out as kind of a dick, and doesn’t seem to really care about his father, nor his sister. But as the layers peel, we get a glimpse into the life of someone associated with a family member dealing with mental illness. Just like the family member of an addict, the illness doesn’t just affect them, but everyone around them. As the story continues (predictably), we do see a comfortable resolution to Scott and Cindy’s adventure, even if it’s heartbreaking for a while. And we cannot talk about performances without mentioning Lola Kirke’s performance as Cindy. While I am by no means a psychologist/psychiatrist, nor do I know anyone with schizophrenia (so she could be way off with how it really is), but to watch her performance is outstanding, especially as Cindy starts to decline in her mental status.

One thing that works exceptionally well is the ending where a therapy session happens with the cast and actual family members of people with family members that have mental illnesses to help further communicate to the audience that even though Broken Diamonds is a dramedy, dealing with a loved one who has a mental illness is a very real thing. They need our love and support every day. Some may be good, some may be bad, but they are still our family and need our support.

Broken Diamonds is available in theaters and On Demand.