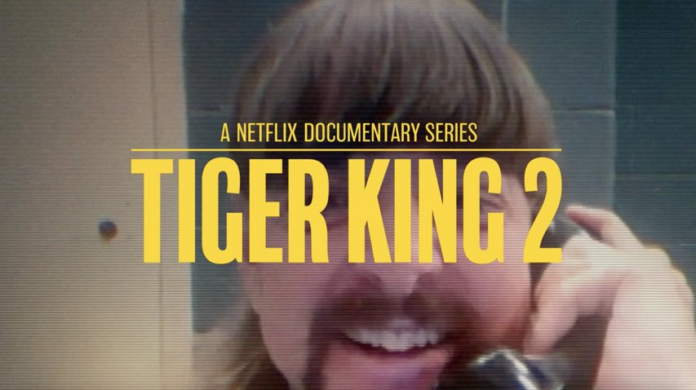 Tiger King 2 is finally here and at the time of Halloween right around the corner. Last year was full of Harley Quinn costumes galore so, this year could be a peppered array of Joe Exotic’s and Carole Baskin’s in their tiger ‘glory’.

Netflix introduced us to the first season of the series, Tiger King: Murder, Mayhem and Madness, with seven “I can’t believe what I’m seeing but can’t get enough if it” episodes. The second season was filmed in 2020 and into part of 2021 but a lot has changed since the first season.
Directors Eric Goode and Rebecca Chaiklin presented the docuseries that explored the insane world of tigers, lions, and other big cats (“oh my”) owners and rivals, Joe Exotic and Carole Baskin. It spawns into a murder-for-hire plot against Carole Baskin, who runs Big Cat Rescue. She has vigorously lobbied to shut down facilities who mistreat exotic cats and animals, more specifically targeted at Joe and his team of rifraffs at their mismanaged site in Oklahoma.
Baskin was able to finance her battle through the fortune she inherited from her late husband, who disappeared under mysterious circumstances. Which is still an unsolved mystery to this day. Through more recent news that may be featured in the second series, Baskin was able to acquire Joe’s property. In January 2020, Joe Exotic was sentenced to 22 years in federal prison. In July, a federal appeals court ruled he should get a shorter prison sentence. He thought he was going to get out with the help of Trump but that fell through and hit the ground with a relieving thud. Joe remains in prison to this day.
OK, all you cool cats and kittens…Keep an eye out for Tiger King 2 premiering later this year on Netflix.