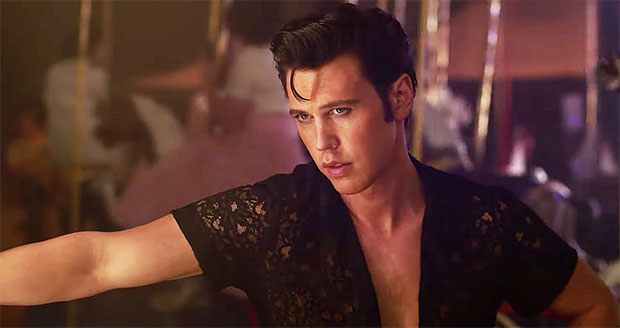 Nobody goes to a Baz Luhrmann movie for a “small” experience. Baz doesn’t do small movies. This is the guy who made a movie about ballroom dancing feel larger than life, and turned The Great Gatsby into a glitzy/glam party throwdown. So what would Luhrmann do with the story of Elvis Presley? The filmmaker for which scale and excess are a given telling the story of the ultimate showman and rock god, whose life infamously burned out rather than faded away? On paper, the match is almost too perfect to be true. The interesting thing about Elvis is that whatever you expected for it, Luhrmann did something completely different.

Elvis, which features an incredible breakout performance by Austin Butler that truly captures the spirit and essence of Presley, is a battle between good and evil in the guise of a rock biopic. This thing ain’t a boring lump like Bohemian Rhapsody or Respect, thank goodness. This is a Baz Luhrmann film, after all, and it thumps with the sounds of soul and gospel music, it pounds like the beat of a young Elvis’ heart when he first hears the rapturous blending of the two sounds. This moment comes when Elvis is literally between a thunderous sermon at a black church while “in the spirit”, and a blues performance at a nearby juke joint. The opening sequence never lets up, the music pulses, the camera swirls and swoons. It’s like the origin of a great superhero. We’re told that young Elvis loved Captain Marvel Jr. (Shazam’s pal) comics and even wore a version of his thunderbolt on his chest.

But this grandiose introduction isn’t just to set up Elvis Presley as the hero of this story, it’s context for establishing his polar opposite. Tom Hanks plays Col. Tom Parker, who would eventually become Elvis’ notorious manager. The film is as much about him as it is the rock star, and is framed around a dying Parker’s final thoughts which are, naturally, all about himself and how he’s been wronged in the media. Blamed by many for driving Elvis to an early grave, Parker insists that he made Elvis Presley, and that’s all that should matter.

So this is no deep dive into the life of Elvis Presley. It is very surface-level and frequently on the nose, but so what? It just looks and feels so damn good! Besides, being bluntly to the point often works in its favor. One of the many themes in the film is white fear of Black music, and how Elvis successfully navigated this space in-between. He became friends with numerous black musicians, including BB King (played wonderfully by Kelvin Harrison Jr.), who greatly influenced his sound and persona. In one scene, an angry Elvis, who had seen his act neutered because of the way his gyrating hips and thrusting pelvis drove women nutty, hides out in a party with BB King, Little Richard (Alton Mason), and other R&B legends. It’s so jumpin’ I wished I could’ve been there, in that moment, more than any place in the world.

As someone who has never really thought much of Elvis Presley’s music, Luhrmann has turned me into an overnight fan. Of course, this being a Baz Luhrmann joint, Elvis’ classics are tethered with modern sounds undoubtedly influenced by him. But also, Luhrmann does a lot to pay tribute to the music that inspired Elvis, as well. The combination of gospel, funk, soul, and modern hip-hop is intoxicating.

When called upon, Butler’s renditions are powerful, and he expresses something about Elvis that a lot of us (including myself) just didn’t see: he was a dreamer and a family man. He kept his family close, even those who meant him harm (Richard Roxburgh is right scum as Elvis’ corrupt daddy), and put them before himself at almost every turn. And while he often fell victim to Parker’s machinations, Elvis lived the life he always wanted. The film sorta skims over his acting career, which had definite highs before becoming the butt of jokes. Elvis then had to make a decision, which was to continue being Parker’s puppet or fight for his own creative freedom, and the night of a televised Christmas special that goes awry is as crowd-pleasing a comeback spectacle as you’re likely to see this year.

On the other hand, it’s unclear why Hanks is in this movie at all. The accent he’s trying to do is clownish, and there’s just not that much to the character other than straight villainy. He’s so over-the-top it’s tough to forgive Elvis for being conned by his obvious snowjob. It makes Elvis look like an idiot. It also undercuts the entire point of Parker’s storyline which is that he believes he’s the hero of this story, not Elvis. Well, nobody who acts the way he does could possibly think so, not even if delusional.

Of course, we also know how this story ends. Luhrmann lingers on the downward spiral for too long, unsure of how to cap off the King of Rock ‘n Roll’s career in a way that isn’t humiliating. He eventually finds it and does so with respect for the man’s life, his music, his creativity, his love of family, and yet unfulfilled potential. Elvis is pretty much exactly the way you’d want the story of Elvis Presley told by Baz Luhrmann. While every big swing isn’t perfect, nobody is ever going to say that Baz Luhrmann did The King an injustice.