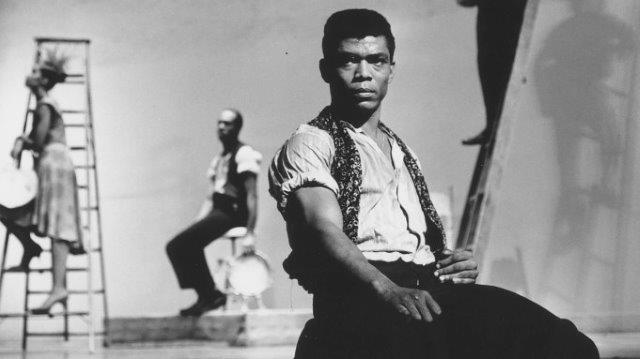 Legendary choreographer Alvin Ailey has become synonymous with dance and creativity. This is mainly due to him creating the worldwide famous and renowned Alvin Ailey American Dance Company, which he created with the purpose of displaying his vision of honoring black culture through dance. The Alvin Ailey Dance Company has toured across the world displaying numerous dance sets he has created and been appreciated by countless people. Despite pretty much changing the came for dance across the world, there’s still a great deal to explore, unpack, and learn about the legendary choreographer and his life story, which is explored in director Jamila Wignot’s documentary, Ailey.

As Ailey begins, we see Alvin Ailey being honored at the Kennedy Center Honors in 1988 for his legacy as someone who changed the game in dance, shortly before his death related to the AIDS epidemic. We see him get his flowers for all the great work he has achieved throughout his life and his impact not only on African American dance, but American Dance as a whole. Immediately we get into the meat of who Alvin Ailey really is and learn his backstory as a young boy born in the Great Depression, whose mother had to move from town to town doing whatever work she could find, which during that time was mainly housekeeping for white households. When he finally settled, he was pushed to play football due to his size and athleticism, but Alvin really wanted to dance (which his football coach said was only for “sissies”). As Alvin takes a change and explores dancing, he right away takes to it.

As Alvin begins to explore dance, he gets really good at it and joins various dance companies, and takes a liking to many black dance companies in California. Eventually, he makes the decision to create his own dance company: Alvin Ailey American Dance Company, and the rest is history as they would say. Using archival footage and Alvin Ailey’s own voice recordings, as well as interviews with still-living members of his dance company, Ailey explores not only the history of Alvin Ailey, but his impact not only on modern American dance, but his impact across the world. As the Alvin Ailey American Dance Company increased in popularity, the US State Department partnered with them for various cultural exchanges across the world. Even though his dance group had to pick and choose which hotels were going to be racist to the dance group, they were getting 20-minute standing ovations in Vietnam, Australia, and even in Russia.

Ailey goes into detail not only about the man, but his thought process of choreographing many of his now-famous dance numbers, and the history of them. For example, his best-known work “Revelations” is based on his own Christian upbringing through his observations of black people in the church and exploring slavery, baptism, and celebration at the same time. Other numbers he has created were drawn out of protest. One thing specifically mentioned is the death of Black Panther leader Fred Hampton by the hands of law enforcement impacted him as it was a murder of a Civil Rights leader and as a black man, it’s hard not to feel an impact from that event. Members of his dance company told filmmakers that many of the dance numbers he created and choreographed were his own form of protest against many injustices going on to African Americans.

Ailey also explores the notion that Alvin also was a “tortured creative,” and like many people in charge of making unique and exquisite art, they are often lonely. In fact, one of the people interviewed comments on the fact that when you are the creative leader of art, who can help you? He also was starting to hate the idea of Alvin Ailey the persona and people didn’t see him as an actual person. In addition, he adopted the viewpoint that the State Department working with his dance company and sending them across the world was “selling out” to display that “America’s not racists, see look at Alvin Ailey.” As a result, he suffered from mental illness, but thanks to the support of his dance company and his ever-enduring mother, he was able to continue on. Alvin Ailey also was a closeted gay man, who always kept that part of his personal life away from the public eye, but when the AIDS epidemic started to storm across the country in the 1980s, he, unfortunately, contracted the virus. The irony of him receiving the Kennedy honors for his work and being celebrated by Ronald Raegan while Raegan laughed at the idea of AIDS even being a serious disease is not lost on director Jamila Wignot in her imagery in Ailey. The heartbreaking recollections from members of his dance group not only show how much they revered him, but also how deeply devastated by his loss.

One criticism of Ailey is that it does not tell a linear story through the documentary. We continuously see time jumps throughout the documentary. Some moments highlight his childhood, then fast forward to the 1970s, then jump back to the 1960s, which may prove confusing for people without a complete historical view of not only Alvin Ailey, but also events going on in America during those times. In addition, there are scenes showing the Alvin Ailey American Dance company preparing a session for the 50th anniversary of the dance company back in 2018. While it displays the impact of the dance company and showcases that the dance company is still active in training the next generation of dancers, it doesn’t feel like it fits into the documentary and probably was not needed to be included.

That said, Ailey is a fascinating documentary as it honors Alvin and his everlasting impact not only on dance but American culture overall. The sad part is, that he’s someone that pop culture should be celebrating a thousand times over. While director Barry Jenkins is currently developing a biopic on Alvin Ailey, it’s almost inexcusable that there have not been more mainstream examinations of his life and legacy. Ailey is a great start, but the world needs to be reminded just how fascinating a person Alvin really is.

Ailey is available in select theaters in New York and expands nationwide on August 6.