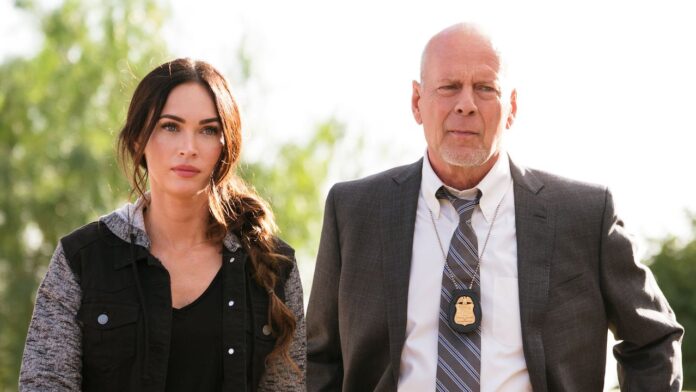 Longtime uber-producer Randall Emmett finally gets behind the camera for Midnight in the Switchgrass, and it’s a wonder why. Why choose this dull, derivative thriller of all things with which to launch your filmmaking career? Considering the wealth of paycheck films he’s hired Bruce Willis to star in, it’s no surprise the sleepy-eyed actor would come back to snooze through another. But other than the fascination of watching Willis try to stay upright for the few minutes he’s on screen, the only other reason to watch is the film’s true star, Megan Fox, but that’s not a good thing, either.

Midnight in the Switchgrass has some buzz surrounding it, not for the quality of the movie but because it’s the film where Megan Fox and Colson “Machine Gun Kelly” Baker began their headline-grabbing relationship. They share a couple of scenes together, him as a scumbag pimp and her as FBI agent Rebecca Lombardo. They don’t exactly crackle with electric chemistry or anything, nothing in this movie really does.  Along with her soon-to-retire partner Karl Helter (Willis, looking already-retired) they’re investigating the constant disappearance of women in their small Florida town. Well, sort of. Early on, Helter witnesses a staggering, obviously distressed woman march right past him and he does nothing. Moments later she’s accosted at a truck stop and violently rescued by shifty trucker, Peter (Lukas Haas), who clearly is no saint either. Good detective work there, champ.

Emile Hirsch plays Officer Byron Crawford who is also concerned with the fate of women in his town, but for reasons the shoddy script never clarifies, he’s meeting headwinds from the upper brass. He’s punted off the high-profile case of the missing woman, and instead forges something of an alliance with Lombardo to flush out the perpetrator. Neither character is given any sort of detail that we should care about, other than Crawford’s bland assertion that “nobody has ever stood up for those girls”.

Not that Midnight in the Switchgrass concerns itself with the plight of abducted and abused women. The characters in it can scarcely be bothered to show interest in the women who are alive, and that includes Lombardo who is a complete cipher. To her credit, Fox, who I think is a better actress than she is given credit, does her best with a role that is woefully underwritten and leaves her stranded as to Lombardo’s motivations. Hirsch is committed to his role, as well, and at least is given something to do as Crawford struggles with work/life balance and the effect the job has on his psyche. There’s no interesting spin on the familiar trope of cops being overwhelmed by the evil they see every day. Out of everyone, it’s Haas who seems the most comfortable as a monster living a double life, hiding the cruel side of himself from his knowing wife and young daughter. Haas has played these sorts of creepy characters before and he’s scarily good at it. A scene where Peter corners an elderly neighbor has the prickly tension you wish the rest of the film could match.

By the time Midnight in the Switchgrass ramps up into an effectively edgy cat-and-mouse game it’s already too far gone, any hope of it rebounding lost in the weeds.

Midnight in the Switchgrass is available in select theaters, digital, and VOD now.