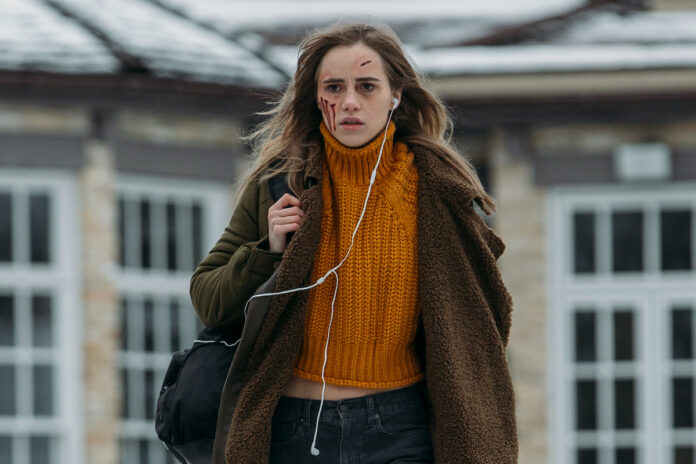 If you know the name Simon Barrett at all, it’s probably due to the work he’s done with Adam Wingard on two excellent thrillers: You’re Next and The Guest. Both films take simple ideas and subvert genre conventions, creating something that feels palpably different in the process. As Barrett makes the move to directing with Seance, he tries and largely succeeds to do the same, combining mystery, teen slasher, ghost story, and revenge flick all in one.

Suki Waterhouse (Assassination Nation) plays Camille, a mysterious new arrival at the Edelvine Academy for Girls, a private school where the students are still recovering from the shock of a tragic death, a death that some of the girls also feel a little responsible for. Camille’s arrival sets off a shockwave, drawing the attention of the resident mean girls (played by Inanna Sarkis, Madisen Beaty, Megan Best, Stephany Sy, and Jade Michael) looking to make her an instant outcast. But Camille befriends fellow outsider Hellina (Ella-Rae Smith), just in time for the body count to stack up as the girls start dying in grisly fashion.

While that may seem like a pretty straight-forward slasher flick in the vein of Sorority Row, Barrett shakes things up by adding supernatural component. The film isn’t titled Seance for nothin’, as the girls called upon the spirit of a ghost that supposedly haunts the boarding school’s grounds. Later, because people in horror flicks are stupid, they perform the act again. But is it really a malevolent force that’s after them? Or something more down-to-earth?

Barrett does a good job of making everyone a suspect. All of the students are awful people, for the most part, including handyman Trevor (Seamus Patterson), apparently the only guy around, and the headmistress who doesn’t care if the girls die as long as it doesn’t hurt the school’s reputation. The way they’re set-up is pretty formulaic, though, which is strange coming from Barrett. The characters don’t have much depth, and jump scares are aplenty.  You would think with Barrett mixing in so many different genres that he’d find new ways to weave them together. but things play out in fairly predictable fashion.

That said, Seance works in just about every other aspect. Barrett conjures up some really inspired kills, while also leaving room for our imaginations to go nuts. There’s also something dangerous and fun about a horror set amongst an all-girl school where surviving the social hierarchy can be murder enough. Barrett doesn’t fall into the trap of oversexualizing things, either, even when romance begins to blossom between two of the girls he gives it proper room to develop.

Although she’s definitely too old to play a college kid, Waterhouse is excellent as the enigmatic Camille, exuding quite a lot of Sharni Vinson in You’re Next energy. The bulk of the cast make the most out of one-dimensional characters, giving them more life than the script affords. The standout is Smith, however, whose Hellina is a jumble of emotions, mainly fear, demonstrated by an outward need to forge a genuine connection with Camille.

Not every twist and turn makes sense or is satisfying in the way Barrett might’ve hoped, especially a final act reveal that nearly derails the whole thing. The tropes Barrett employs feel like they’re coming from someone with a genuine love of genre, and combined with a talented cast Seance is worth conjuring up if in need of an entertaining distraction. When Barrett gets a grip on both writing and directing, he’s going to be a filmmaker to keep an eye on.