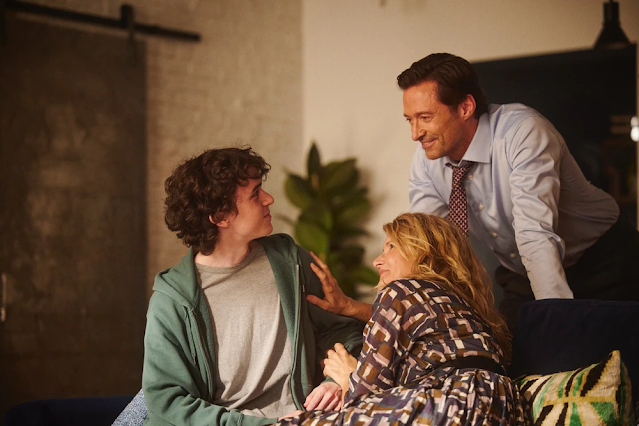 Why didn’t anyone tell me The Son was a horror movie? That’s certainly what it felt like watching Florian Zeller’s latest crippling family drama, his follow-up to 2020’s acclaimed The Father. Once again adapting his own stageplays alongside co-writer Christopher Hampton, Zeller has found a way to take all of the genuine emotion and authenticity of his previous film, and replace it with characters who never feel the least bit real, and make ludicrous errors while dealing with the very legitimate problem of depression. Going back to the horror analogy, it’s like watching a bunch of clueless idiots stumble into a tragic demise that we all see coming a mile away.

Once again, Zeller has gathered an incredible cast to give The Son as much of a punch as possible. Hugh Jackman stars as Peter, a man who is trying to start a new life with his new wife Beth (Vanessa Kirby) and their new child. A high-powered business exec, Peter seems to have it all. However, his old life won’t let him go. Peter left behind his ex-wife Kate (Laura Dern) and their teen son Nicholas (Zen McGrath) to be with Beth. He harbors a ton of guilt for it, especially when Nicholas starts skipping school and scaring his mother at home. The boy is showing signs of severe depression, stating that he can’t bear the weight of living anymore. So Peter decides, with Beth’s hesitant approval, to let Nicholas move in with them.

This was horror movie mistake number one. You don’t want the call to come from inside the house! Right from the beginning, we see how manipulative Nicholas can be. He talks a good game about being better, and perhaps on some level he believes it, but it’s also clear that he harbors a lot of resentment towards Peter. More than that, he seems to harbor tremendous ill will towards the women in his life, both his mother Kate and towards Beth, the latter he blames for breaking up his parents’ marriage. Frequently, scenes cut to the growing intense tumbling of a washing machine, and part of me kept wondering when Nicholas was going to toss his new brother-in-law in there with the laundry.

It’s easy to see what Zeller is trying to do here, and it’s a noble if failed effort. Much like dementia in The Father, the issue of depression is one that must be handled delicately. He wants to show that severe depression isn’t something that can be easily diagnosed or treated. Furthermore, its origins are unclear. Nicholas often blames Peter for the way he’s feeling, which only adds to the burdensome guilt his father carries. Other times, Nicholas is unsure why he’s feeling the way he feels.

The problem is that very few scenes feel like they are populated by real human beings. Someone ought to tell Zeller that simply having your characters stare blankly while others try to get their attention is not a substitute for actually showing real emotion. Jackman spends more time looking dumbfounded than anything else in this film, a poor use of his incredible talents. The rest of the time he’s left to explain Peter’s guilt to us ad nauseum, although once is quite enough and there are other characters who pick up the slack in reminding us, too. We get it. But his guilt isn’t enough to explain every poor decision, overlooking physical harm being done, the lies, and the threat of future violence. It becomes comical, anticipating which way Peter will miss an obvious chance to do something that might actually help his son.

Even the use of Anthony Hopkins, who won a Best Actor Oscar for his performance in The Father, fails to connect. He plays Peter’s father, Anthony, and it’s clear there’s a legacy of abandonment that runs in this family.  In an utterly useless exchange that could’ve been done in a 30-second phone call, Anthony proves that he was ten times the schmuck that Peter currently blames himself to be. The scene exists to get Jackman and Hopkins in the room together, but that’s it.

Zeller repeatedly hammers the audience with what they should be feeling at any given moment, manipulating us in ways that do the subject a disservice. But Nicholas’ problems are all surface-level. We don’t know much about him other than he used to be happy as a child. Well, so what? Everything is surface, and even this talented ensemble can’t get deep enough to fix it. I don’t want to blame McGrath because the bigger problem is the screenplay, not his performance. Dern and Kirby come off as the best of everyone. I especially like Dern’s portrayal of Kate because, in a way, we see where Nicholas gets some of his manipulation talents. She repeatedly uses this situation to gently remind Peter how happy they used to be, and to worm her way back into his life. Kirby’s Beth is always on the outside looking in, put into the position of telling her husband just how blind he’s being to the truth. And the truth is that Nicholas is going to do something awful if you don’t wake the f**k up.

Meanwhile, all we can do is sit and wait for that awful thing to happen because we’ve had two hours of experience that the people in this movie are idiots.

Blatantly designed to be an awards season favorite, The Son puts on airs as a serious-minded exploration of a family’s struggles with depression, but it is woefully fake and downright ridiculous throughout. Zeller has now adapted two of this trilogy of plays into features, and one has to assume he’ll eventually get around to The Mother. When he does, at least he can do so knowing that it can only go up from here.

Sony Pictures Classics has released The Son into select theaters and will take it nationwide on January 20th 2023.