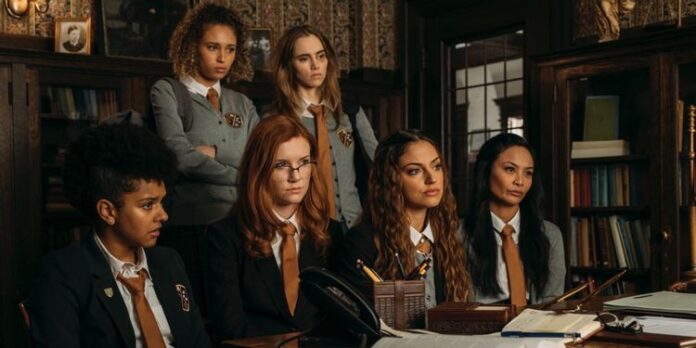 While it’s director Adam Wingard who has seen his career skyrocket off films You’re Next and The Guest, we can’t forget to give credit to writer Simon Barrett. While Wingard has gone off to do blockbusters like Godzilla vs. Kong and ThunderCats, Barrett is charting a new path for himself as well, making his directorial debut on the upcoming horror film Seance, set at an all-girls’ academy where the students make a terrible decision.

Starring Assassination Nation‘s Suki Waterhouse, Madisen Beaty, Ella-Rae Smith, Inanna Sarkis, Seamus Patterson, and Marina Stephenson-Kerr, Seance follows a group of girls who make the unfortunate choice to perform a ritual calling on a spirit that has been haunting the school. How do you think that turns out?

Barrett has shown an ability to take seemingly familiar ideas and turn them into gripping thrillers. Seance, which opens in theaters and VOD on May 21st, looks like another such example.

Camille Meadows is the new girl at the prestigious Edelvine Academy for Girls. Soon after her arrival, six girls invite her to join them in a late-night ritual, calling forth the spirit of a dead former student who reportedly haunts their halls. But before morning, one of the girls is dead, leaving the others wondering what they may have awakened.