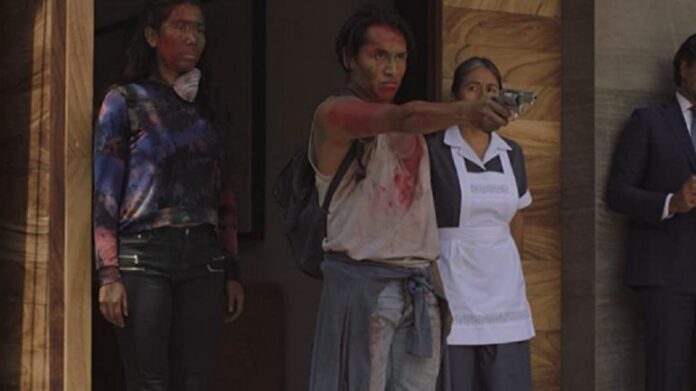 Get ready for 80 minutes of brutal, unflinching, and raw dystopian fantasy that explores with extreme violence the class divide within Mexico. Although, really, Michel Franco’s New Order should be a warning shot across the bow for any society where the disparity between wealthy and poor is so wide that it becomes dehumanizing, a daily humiliation to be endured, and that includes us right here in the U.S.  Take note: this movie is not for the faint of heart.

Franco’s tightly-focused, blistering effort centers on a hostile takeover within Mexico City. On their wedding day, Marianne (Naian González Norvind) and Alan (Dario Yazbek Bernal) have gathered their families and others of the elite and affluent to their home to celebrate. Just blocks away, the poor and darker-skinned folk have launched a massive protest against rich people just like them, dowsing everything and everyone in green paint, a symbol of the blood that is on their hands. Um, read the room, maybe? While her brother Daniel (Diego Boneta) is a pretentious prick with little care for the plight of others, Marianne is different. She braves the danger outdoors to aid a beloved former employee whose wife is in need of money for an emergency surgery.

Her altruism comes at a price, and nobody outside the walls of her family estate is going to give a damn. Protestors breach the walls, and in quick, lethal fashion strip everyone of their money, valuables, dignity, and in many cases, their lives. Franco holds nothing back, the camera catching every act of cruelty against the prosperous whites, as if getting retribution for generations of oppression in a single swoop. Those who die quickly may actually be better off, for being captured comes with altogether different acts of barbarity.

With Best Picture winner Parasite‘s rage for the marginalized still ringing in many of our ears, New Order takes the retribution angle to a much wider, darker degree. This is no simple fairy tale about an uprising against a ruling class. Franco expands it in ways that are frighteningly real. What would an already-corrupt government do with the kind of anger on display? How would they use it? Control it? It had me thinking of the way some of our own elected officials have fueled public outrage to serve their interests, either through fundraising our draconian legislation.

While it would’ve been easy for Franco to keep to the fringes, he finds a sadder emotional core in the story of Cristian (Fernando Cuautle) and Marta (Mónica Del Carmen), family employees who find themselves caught in the middle.  When push comes to shove, or in this case when the gun is put in their faces, who will they serve? The employers whose privilege they acknowledge but don’t despise, or the attackers who use blackmail and murder as tools? If New Order wants us to come away with anything it’s that failing to choose a side is still a choice, and inaction will exact a very heavy price. 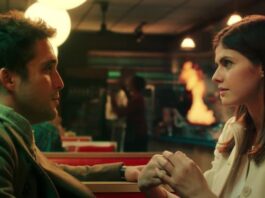 ‘Die In A Gunfight’ Trailer: Alexandra Daddario And Diego Boneta Are... 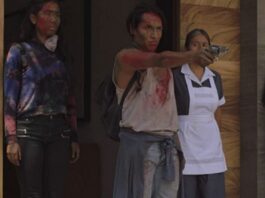 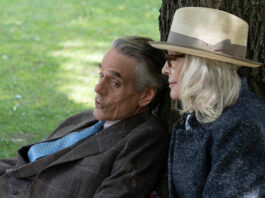