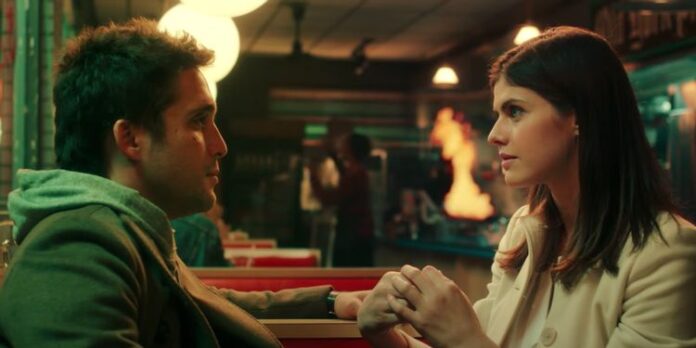 The evolution of Romeo & Juliet adaptations isn’t that filmmakers have found new ways to adapt Shakespeare’s classic love story, they’ve just decided to try and level up what Baz Luhrmann did. The returns have been limited, though, and Die in a Gunfight, a high-energy romance with a screenplay selected for the 2010 Black List, is another poor attempt at modernizing the Bard. This despite a somewhat starry cast led by Diego Boneta and the always-wonderful Alexandra Daddario as star-crossed lovers, the film suffers from an abundance of empty style from director Collin Schiffli.

Forget the warring Montagues and Capulets. Die in a Gunfight has rival media conglomerates, the Gibbons and the Rathcarts, locked in a blood feud spanning generations. Troubled son Ben Gibbon (Boneta) hurls himself into one losing fight after another, just in hopes of feeling something since being forced apart from his soulmate, Mary Rathcart (Daddario). Mary follows the family line, keeping a calm face while inside she boils with rage at being trapped like a bird in a cage. She had a chance to get out, and now that chance is gone. Instead, she’s got a bizarro stalker, the creepy/ambitious Terrance (Justin Chatwin), who refuses to let her go. One of Ben’s near-death exploits earned him a Mercutio-esque pal, Mukul (Wade Allain-Marcus), who is never far behind.

All of this is explained in flashy animation, voiced by the ever-present Billy Crudup. Die in a Gunfight might’ve been better served sticking with this approach, because once it stops the exposition keeps going in less exciting fashion. Writers Andrew Barrer and Gabriel Ferrari, who saw their lauded script languish in development Hell for more than a decade, should’ve spent that time giving it a much-needed polish. For all of its contemporary flourishes, the basics don’t stray too far from what Shakespeare had in mind, and yet the screenplay operates as if it’s providing new information.  The audience gets it.

Ultimately, the biggest problem with Die in a Gunfight is direction, which is tonally all over the map and burdened with cheap visual tricks that undermine any connection with the characters. Schiffli pulls out all of the stops, going overboard to show what he can do in the biggest film of his career after a couple of indies with The Suicide Squad actor David Dastmalchian. But all of the unnecessary rewinds and flashbacks, lighting and aspect changes, and even a few scenes straight out of a Viewfinder, can’t distract from a remarkably haphazard film. Wildly over-the-top charactes such as Chatwin’s toxic Terrance, Travis Fimmel’s lovestruck psycho Wayne, and Emmanuel Chriqui’s Barbie suggest a certain tongue-in-cheek attitude that Schiffli gives up on. Once the tragic lovers are reunited, the film slows to a crawl where little actually happens other than rehashing past events incessantly. Nobody has anything to talk about and yet none of them will shut up.  Even the enigmatic Mukul, who looks like he’ll be a daring wildcard in the mix, becomes pretty dull and obvious after a while.

While Daddario is good enough to roll with the punches, giving Mary a certain amount of pluck and fight, she doesn’t get much from Boneta other than a pretty face. Neither is spared from a labored final act involving a wedding, some nonsense about a corporate mole, and a fateful act of revenge. By this point it’s hard to care whether anyone actually does die in a gunfight, and why we should care that they did.