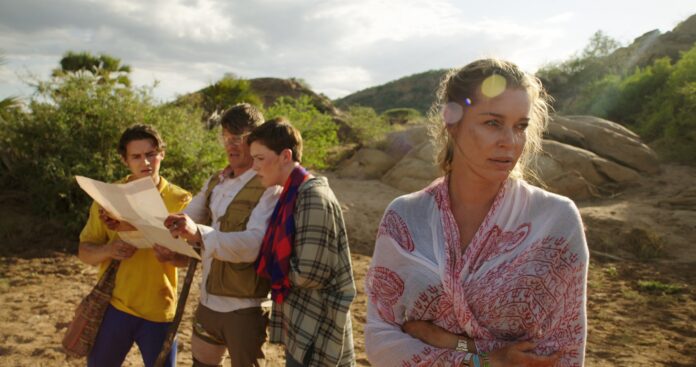 Following last year’s anti-poaching/runaway lion action flick Rogue, director MJ Bassett returns to (or more accurately, stays in) Africa for Endangered Species. Bassett, known for directing wild genre flicks like Solomon Kane and Silent Hill: Revelation, is also a wildlife photographer with a genuine passion for animal preservation. But she hasn’t forgotten her love of action movies, either, and combines these two things for an exciting survival tale with its heart in the right place.

A vacation-gone-wrong disaster film, Endangered Species follows one entitled family as they face dangers in the African wilds. Troubled oil exec Jack (Philip Winchester, a Bassett favorite), his diabetic wife Lauren (Rebecca Romijn), their rebellious Ivy League daughter Zoe (Isabel Bassett, MJ’s daughter and co-writer), and their gay son Noah (Michael Johnston) are in for a wake up call when they arrive in-country on a trip they can scarcely afford and don’t really want to take together. The tension is high, made worse by Zoe’s stoner/loser boyfriend (Chris Fisher) always getting in the way of rational discussion.  But all of their family troubles take a back seat when they stupidly buck the rules and drive into a restricted area of a safari park and, shocker, shit goes belly-up real quick.

Part of the fun of Endangered Species is seeing how remarkably stupid the affluent can be when put into an uncontrolled scenario on foreign soil. The first mistake is getting between a baby rhino, admittedly very cute thanks to the CG effects, and her angry mama. When the mama rhino takes issue and horns their truck onto its side, the family is stuck out in the open like a lion’s lunch waiting to happen.  Or in this case, a badly CGI’ed leopard and a pack of hungry hyena.

I’m mentioning the CGI because it’s undeniable that the effects aren’t very good. You can’t ignore it. Clearly running on a limited budget like many of her films, Bassett makes the most of a lousy situation. While the digital predators are shaky, Bassett indulges us with gorgeous views of the natural environment, seen from the perspective of someone who sees the beauty and danger in all of it.

The greatest danger is, of course, man himself. Romijn’s real-life husband Jerry O’Connell plays an evil poacher (is there any other kind?) who arrogantly rationalizes what he does by explaining that Jack and his oil buddies are a global threat. Bassett at least makes a passing attempt at some shades of grey here, recognizing that many of Africa’s poachers are poor people just trying to survive in the only way they know how. But subtlety isn’t this movie’s strong suit; the entitled Americans get taught harsh lessons, the bad guys get the ironic comeuppances they deserve, and so on.

While the plot unfolds pretty much as you would expect, the Bassetts’ script does a good job of making you care that the family is on the menu at an African buffet. O’Connell shows the manic energy we like to see from him, making his rhino horn collecting baddie someone we want to see humiliated. And Isabel Bassett, in her biggest acting role to date (one she didn’t necessarily want), gives Zoe a surprising amount of depth when we think she’ll be a one-note brat. Endangered Species is the second of what Bassett hopes will be a loose-knit trilogy of action films raising awareness about poaching, and she’s the rare filmmaker who can pull it off while remembering to entertain first.

Endangered Species opens in select theaters, Apple TV, and digital on May 28th.