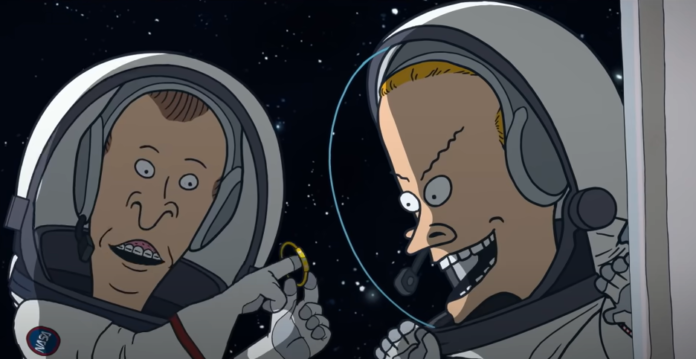 Just for clarity sake, that quote in the title is taken directly from the trailer and while likely accurate we should remember that “Stupid” quite often equals funny (for those with a 13 year old boys sense of humor….like me!).

90s nostalgia is real, and making me feel older every day. Midriff baring shirts, wide leg jeans, and now everyone’s favorite loser duo has returned! Beavis and Butt-Head Do The Universe, which is being released direct to stream with Paramount+, marks the first time the two metal heads have graced a feature length film since Beavis and Butt-Head Do America. Was a follow-up needed? No, of course not. Will I watch it? Probably, if the great Cornholio commands it.

Those who reveal in the comfort of the familiar will be happy to know that not much has changed in the last 26 years for these two (who should be in their late 40’s by now), they are still overly preoccupied by sex and heavy metal, and they still find themselves in the most odd of situations. This time, on a rocket ship to space leading them on an adventure that this trailer promises will cross the stars and the bounds of time.

Official Synopsis:
In perhaps the dumbest space movie ever made, Beavis and Butt-head are sentenced to Space Camp by a “creative” judge in 1998, leading to a trip on the Space Shuttle, with predictably disastrous results. After going through a black hole, they reemerge in our time, where they look for love, misuse iPhones, and are hunted by the Deep State. Spoiler: They don’t score.