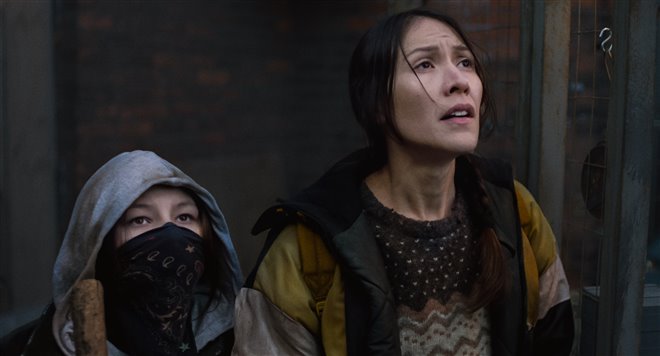 In a time where children are taken from their parents by the government and schooled to forget their language and culture, Niska (Elle-Maija Tailfeathers) lives in the woods to keep her 11-year-old daughter, Waseese, safe. The world that Cree-Métis filmmaker Danis creates for Niska and Waseese in Night Raiders is not that different from America’s and Canada’s unsavory pasts.

The similarities between the actual histories of North American indigenous tribes and this sleek futuristic dystopia are blatant and purposeful. Goulet’s 2043 version of the world is still rooted in our own in terms of look and aesthetic. This directorial choice makes Niska’s decision to surrender her child to the state after she suffers an accident even more heartbreaking. When she regrets her actions, she meets the Night Raiders, a Cree Vigilante group determined to free kids from these government-run schools before they become brainwashed.

Goulet’s heart seems to bleed into this film. Heartbreaking and well-acted, the first time filmmaker raises real questions about indigenous schools and the current state of their communities all over the continent. She stretches a tight independent film budget to create a crisp and refreshing modern sci-fi fable. It’s no wonder Night Raiders played at this year’s Berlin and Toronto International Film Festivals.

Without intending to, the film falls prey to many of the YA post-apocalyptic film adaptations that audiences were bombarded with five years ago. Its opening scene starts with a young girl running through the woods that then tries to kill a bird with a slingshot. After failing to do so, she asks her mother what the difference is between a vampire and a werewolf. In a 30 second period, the film unintentionally references both The Hunger Games and The Twilight Saga.

The staccato nature of the film’s pacing also impedes the viewer’s experience. Fast action scenes are interspersed with long bouts of dialogue. It fails to hold the intensity that its premise sets up, telling us about what is happening rather than showing.

Night Raiders is one of many native and indigenous projects gaining traction this year. Shows like Rutherford Falls and Reservation Dogs have gained praise for their Native representation in front and behind the camera with all native writer’s rooms and the first Indigenous showrunners. Taika Waititi, who is Māori and produced the latter show, came aboard Night Raiders as an executive producer.

Whether or not the success and critical acclaim of these recent projects are an indicator of Indigenous stories breaking into the mainstream remains to be seen. However, Goulet’s script proves that audiences have been missing out on a whole different perspective of filmmaking due to the lack of representation in Hollywood.

Night Raiders is in theaters and on-demand. Watch the trailer below.