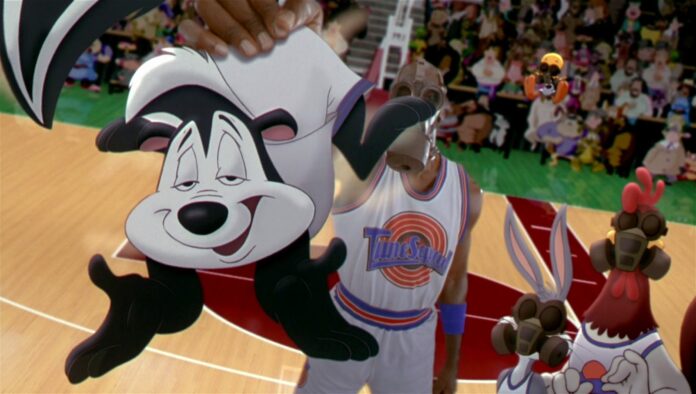 Uh oh, get ready to start hearing about Pepé Le Pew being canceled! The malodorous Looney Tunes skunk was always problematic. We were just too young to notice or care. But he’s known basically for just one thing, and that’s his dogged romantic pursuit of Penelope Pussycat, and refusal to take “no” for an answer. While we may have been able to ignore that back in the day, now it’s really not a good look.

Following on news that Space Jam: A New Legacy has tweaked Lola Bunny’s look to make her less sexualized, we’re also learning from THR that a scene involving Pepe Le Pew has been cut. This follow, quite coincidentally, after opinion writer Charles M. Blow wrote a piece saying the character helped too “normalize rape culture.” Here is his tweet recapping the angry response to that piece by “conservatives”…

RW blogs are mad bc I said Pepe Le Pew added to rape culture. Let’s see.
1. He grabs/kisses a girl/stranger, repeatedly, w/o consent and against her will.
2. She struggles mightily to get away from him, but he won’t release her
3. He locks a door to prevent her from escaping. pic.twitter.com/CbLCldLwvR

I mean, pretty hard to argue with him there.

It’s worth noting that the decision to cut Le Pew was made over a year ago. According to Deadline, that scene would have found him as a bartender opposite Jane the Virgin actress Greice Santo, and Le Pew would’ve started making his usual advances. However, she would turn the tables on him, ending with him soaking wet, slapped in the face, and spun into a cartoonish whirlwind.

So yeah, you can expect that some will start adding Le Pew to the”canceled” list along with Gina Carano, Dr. Seuss, and Mr. Potatohead.