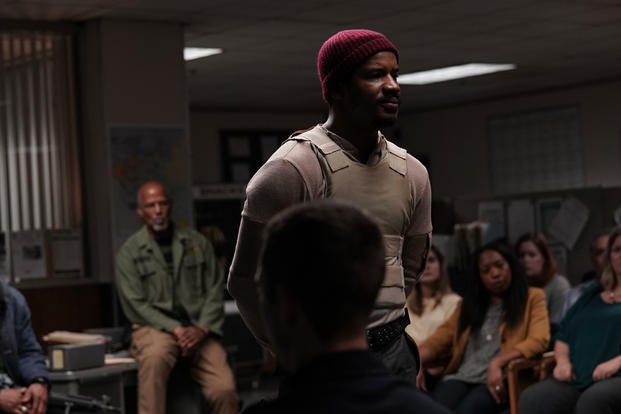 Let’s get one thing out of the way right now. American Skin, the first movie from writer/director/star Nate Parker since his Birth of a Nation debacle from a few years ago, is not a subtle movie. This racially-charged outrage thriller hits with all of the grace of a dropped piano. Parker’s rage and cry for justice at a policing system that allows for the almost-daily murder of black people is wild, unfocused, and manipulative. It’s also justified, tense, provocative, and dares to be bold when other filmmakers stake out more cautious territory.

That American Skin exists at all will be unwelcome news to some. Parker has been persona non grata since sexual assault allegations from the ’90s resurfaced, and his admittedly terrible response to it sank the release of his directorial debut, Birth of a Nation. There are quite a few people who would rather Parker have stayed gone, and are certainly ready to tear his new movie apart no matter how good or bad it might be.

While imperfect, especially as storylines are piled one after another to create a plan of attacking the issue of police violence, there’s undeniable craft in Parker’s ability to grip an audience by making them feel his anger. He was able to do this as Nat Turner in Birth of a Nation, and he does it again as Los Angeles native, Lincoln Jefferson. The film begins with the incident that would change Lincoln’s life, as he drives his 14-year-old son Kijani home from a friend’s house in an affluent neighborhood. They’re pulled over for speeding, although it’s unclear they actually were. The two white police officers make some noise over an expired insurance card, but Lincoln is excruciatingly careful to follow all of their commands to the letter. Kijani, on the other hand, has taken out his phone to start recording the incident, especially when they ask his father to step out of the car. The police ask him to stop recording, Kijani refuses, there’s an escalation and shots are fired.

Parker plays this opening scene perfectly, capturing the sheer terror of what should be something routine and straight-forward. It’s the kind of fear that not everybody gets to know, but those who have experienced it know it in their gut and Parker definitely knows it. A year later, Kijani is dead, the D.A. has refused to prosecute because…well, you know the script by this point; the cop had reason to fear for his life. Lincoln is caught in the despair of what happened, but that despair has now turned to something else. When an African-American officer shows up afterwards, offering little more than platitudes, Lincoln decides it’s time to take action.

American Skin begins as one thing, a drama about a father coping with the murder of his son by police, to a few different things of varying effectiveness.  Parker delves into Lincoln’s backstory to find the raw materials of a searing drama about dealing with tragedy. A former Marine, Lincoln came home and took a crappy custodial job at a prestigious school just so his son could attend there. Kijani was a good kid with a bright future, but he’s a stubborn teen who thinks he has it all figured out. In a telling moment, Lincoln has to remind his son that, yes, they are people who deserve to be respected and the law says so. But as black men, the reality on the ground is that all of the laws and Supreme Court decisions in the world don’t matter when a cop pulls you over. Do. What. They. Tell. You. Get home alive.

Then the film starts to take a turn that, in the beginning, seems like it’s going to go nowhere. A college filmmaker named Jordin King (Shane Paul McGhie) arrives at Lincoln’s doorstep. He wants to make a documentary about Kijani’s death. So we have a movie about a movie being made about a police shooting. Ugh. But the point of this narrative swerve reveals itself soon after, when the film turns into an impromptu legal thriller.

Lincoln, along with a group of his closest friends and family, take up arms against the police and take a number of them hostage. That includes officer Mike Randall (Beau Knapp), who shot Kijani and never had to face justice. Well, he’s about to face it now because Lincoln wants to hold a mock trial to judge Randall’s guilt or innocence.

American Skin very easily could’ve been a disaster, and at various turns I thought it would be. Parker takes some really big swings here, and the trial aspect is just one of them. The whole thing seems ludicrous; a hostage situation that turns into a court case presided over by Lincoln, a bunch of inmates released to be jurors, and attended by handcuffed and very angry cops. Meanwhile, Jordin is there to film the entire thing as part of Lincoln’s master scheme.

Surprisingly, the trial turns out to be incredibly effective and the lynchpin of the entire movie. Parker doesn’t make it easy, either. It would have been simple to pain everyone in that room in black and white terms: the cops are evil and in the wrong, while their victims are purely innocent. Instead, Parker gives the police a voice as well, to express their fears, concerns, and yes, even their biases. In short, they seem like real police officers. Some of the conversations come across as preachy, and there’s a sudden admission that comes out of nowhere like it’s the final minute of an episode of Law & Order, but for the most part Parker provides a real-sounding discussion between groups that typically speak past one another.

American Skin is meant to push buttons; it is meant to be over-the-top because going big is how you get attention for important issues. It is as much a societal fairy tale as Mr. Smith Goes to Washington or Falling Down. Not saying it is even remotely in the quality ballpark as those films but Parker wants to affect change using the best tool at his disposal to do it. That’s an admirable thing and American Skin a worthy effort. Let’s just hope those who have written Parker off give it a chance.