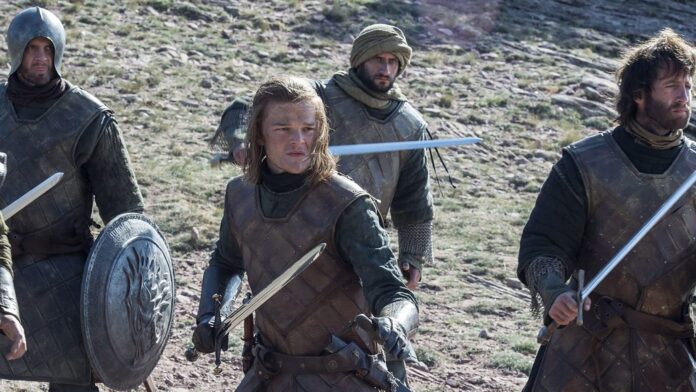 I’m sorry, Game of Thrones fans, but you’re never getting any of the books you’ve been waiting for. Not only has George R.R. Martin inked a new HBO deal that’ll keep him locked up on TV shows for the next few years, but the new story he is making? It’ll be on stage. Whomp whomp.

THR reports Martin is developing a Broadway show on a previously-untold Game of Thrones story featuring younger versions of characters you know and love, such as Ned and Lyanna Stark. It’ll actually center on the Great Tourney at Harrenhal, the greatest tournament in Westerosi history and also the most scandalous.

Here’s the play’s official description: “The play will for the first time take audiences deeper behind the scenes of a landmark event that previously was shrouded in mystery. Featuring many of the most iconic and well-known characters from the series, the production will boast a story centered around love, vengeance, madness and the dangers of dealing in prophecy, in the process revealing secrets and lies that have only been hinted at until now.”

On board the play are producers Simon Painter and Tim Lawson, with Martin writing the script alongside award-winning playwright Duncan MacMillan. The play will be directed by Dominic Cooke, known for his films On Chesil Beach and The Courier, which is out right now. While HBO isn’t involved, it’s possible they could in the future. Perhaps a filmed version of the play, similar to what Disney did with Hamilton?

“The seeds of war are often planted in times of peace,” Martin said. “Few in Westeros knew the carnage to come when highborn and smallfolk alike gathered at Harrenhal to watch the finest knights of the realm compete in a great tourney, during the Year of the False Spring. It is a tourney oft referred during HBO’s ‘Game of Thrones,’ and in my novels, ‘A Song of Ice & Fire’ … and now, at last, we can tell the whole story… on the stage.”

“An amazing team has been assembled to tell the tale, starting with producers Simon Painter, Tim Lawson and Jonathan Sanford. Their knowledge and love of my world and characters has impressed me from the very first, and their plans for this production blew me away since the first time we met. Dominic Cooke, our director, is a former artistic director of London’s Royal Court Theatre, who brought Shakespeare’s dramas of the War of the Roses to television, and our playwright, Duncan Macmillan, has previously adapted George Orwell and Henrik Ibsen, among others. Working with them (back before the pandemic, when we could actually get together) has been a treat, and I am eager for our collaboration to resume. Our dream is to bring Westeros to Broadway, to the West End, to Australia… and eventually, to a stage near you … It ought to be spectacular.”